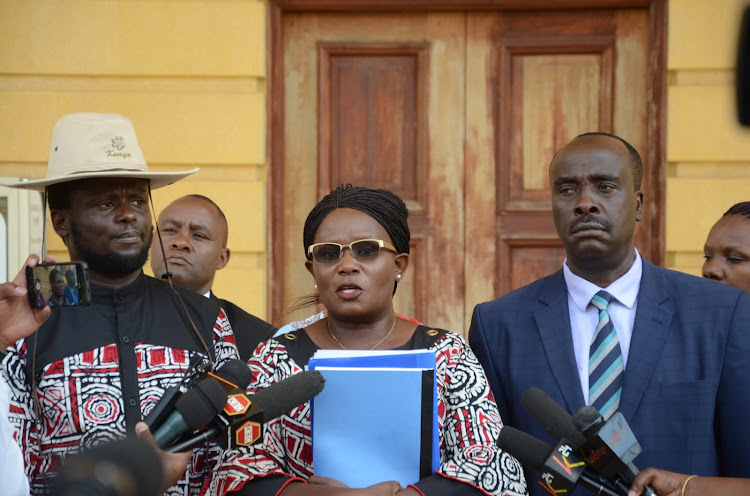 Njuki compared Mwangaza to a proverbial stubborn cow that must be tied for its calves to have milk.

“We are therefore very concerned and will pray for you to have peace and unity that surpasses all understanding as you operationalise your county leadership. If a cow refuses to allow the calf to suckle, it must be tied up but if a calf refuses to suckle it dies,"he said.

In her her response, Mwangaza said "the cow has not denied the calves to suckle."

"There is no need to tie it up. the problem is that instead of the calves suckling, they are throwing stones," she said.

MCAs led by speaker Ayub Bundi said they are contented to stick with their roles of legislation, oversight and representation

“The governor has declared she will be in charge of all projects in villages, we urge you to call her directly and not MCAs," Bundi said.

Athwana MCA Jim Muchui and majority leader Evans Mawira (Mitunguu MCA) pledged to walk the talk and fight for developments even if it means going to the streets with residents.

The Meru MCAs have even printed a poster bearing contacts of Mwangaza, her husband Murega Baicu and her sister as the contact persons for development matters.

Murega was appointed by her wife as the Meru youth service patron and Hustlers Ambassador .

Say wrangles between the governor, MCAs has brought shame to the community.
News
2 months ago

Her style entails a public baraza where she asks residents for their opinion.
Counties
2 months ago

Governor Mwangaza calls off meeting with MCAs after MPs bolted out

The leadership tiff has threatened service delivery at the county.
News
2 months ago
Post a comment
WATCH: The latest videos from the Star
by GERALD MUTETHIA Correspondent, Meru
Eastern
08 November 2022 - 14:48
Read The E-Paper