The pit has been abandoned since 2019.

• Business people and residents living around the abandoned construction have now raised concerns about the health, and security of their children.

• Fifty people, mainly residents of Mavoko signed a petition in protest of the presence of the site in the centre of the town. 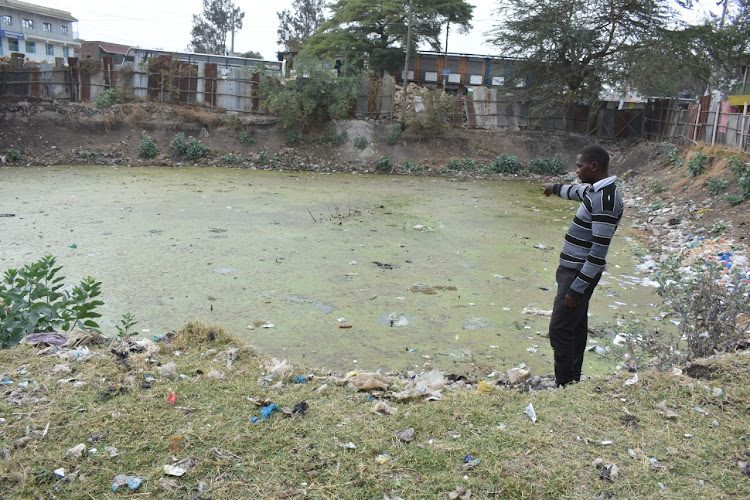 Joseph Muli points at an open excavation that has been abandoned since 2019 in Mavoko CBD. 10 foetuses were collected from it early this year.
Image: KURGAT MARINDANY

A four-metre excavation on a construction site in Movoko town in Machakos county is giving residents sleepless nights after owners abandoned it.

The deep excavation located at the junction of Mzee Paunrana Road in the Mavoko central business district has been collecting water from upper estates of the town and now poses a threat to children playing on an adjacent open field.

The pit has been abandoned since 2019.

Business people and residents living around the abandoned construction have now raised concerns about the health, and security of their children.

“We cannot wait any longer for the owners of this construction site to start work because it is posing a security risk to the residents of Mavoko,” Nzomo said.

“This is a health hazard because it is now a breeding area for mosquitoes, the stench coming from it is a nuisance to the people living around it and finally as we expect the rains, this excavation is posing a danger to  children.”

A lead petitioner of the construction site, Teddy Kigaro, claimed that more than 10 foetuses were retrieved earlier in the year from the gaping pit and they fear that dead bodies could be retrieved from the pit.

“The rains are coming and we worry that if the excavated area bursts its banks the houses and hotels can negatively be affected,” he said told the Star.

Fifty people, mainly residents of Mavoko signed a petition in protest of the presence of the site in the centre of the town.

The owners of 24-Hours Hospital, which is opposite the construction site claimed the stench from pit is affecting patients.

A representative of the site owners, Peter Kivuva, explained that the construction ceased in 2019 after a family member died.

“He was our family estate administrator, and for all those years, we have been struggling in the corridors of justice to replace our late brother with another person,” Kivuva said.

He said they have received a court order for the change of the administrator and their finance company is expected to release the funds before the end of November.

“We are building a five-storey mall with houses and offices on top of it and this will require a lot of money, which is locked up in the banks after the death of our family administrator.”

When asked what immediate measures the family will take based on the complaints raised by the residents and the county government, Kivuva said they have bought a water pump which they will use to rid the water from the excavated site.

“We are also going to put a strong wall around the site to protect the flood water from getting into the pit,” he added.

Post a comment
WATCH: The latest videos from the Star
by KURGAT MARINDANY Correspondent
Eastern
04 November 2022 - 18:11
Read The E-Paper