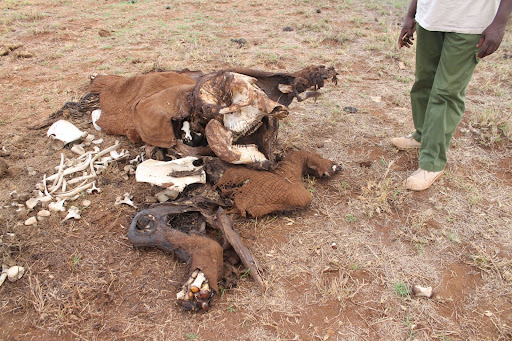 Tens of elephants, endangered zebras and warthogs have died as conservationists seek prayer interventions for rain.

Wild animals, like livestock, have not been spared by the ravaging drought.

Residents bordering parks are also requesting for relief food after the death of their livestock and destruction of crops by wild animals.

They say their demand for compensation of the crops lost has been futile.

“Hunger is affecting both the big and small animals. The old and weak are now dying. There is nothing to eat any more," he said.

The official said they were recently called to 78 Batalion where an elephant had fallen and could not move due to hunger.

"Our veterinarian administered glucose. However, there was nothing to feed on and it eventually died at Nchoroiboro," he said.

O'brein said another elephant died on Tuesday while its weak partner is being fed glucose.

"We have also lost many endangered Grevy's zebras, giraffes and warthogs,” he said.

The official said the animals have not only died in Meru but also in Kitui, Tana River and Garissa.

He said an elephant eats ten times more than a cow yet there is no shrub in Imenti forest and other national parks.

“It is a very sad situation and we may lose them all. Elephants unlike cows, cannot be restrained at one place and fed. We pray it rains before they all die.

"We can only pray that God gives us rains. The elephants used to uproot trees and feed on their backs but the are no trees,” O'brein said.

The official however pleaded with people living near parks and forests to live harmoniously with wild animals.

“I urge our people to understand. It is raining in scattered places and if you see them move near farms, they are desperate. When they see raindrops somewhere they rush there thinking there is something to eat,” he said.

O'brein said most animals also die due to opportunistic infections.

He said they will be conducting a postmortem on the elephant lost on Tuesday morning at Meru National Park.

"Two others also died but with drought and lack of water, anthrax comes in. Wild animals don’t have antibodies anymore and are prone to diseases. They are so weak," O'brein said.

The official said they are waiting for the doctor who is currently treating one at Nchoroiboro to treat another one at Meru National Park.

Resident Kamundi Kiroria said he had never seen an elephant die of  hunger in the 30 years he has lived in Nchoroiboro near Nkunga forest.

“It is sad to see elephants die of hunger. We appeal to the government to save the situation before people start dying," he said.

Kiroria said many people are suffering after their crops were consumed by wild animals.

"We want the Kenya Wildlife Service officers to drive away such animals and keep them where they should be,” he said.

Dida served as both the subject of various documentaries and an iconic tourist attraction.
News
3 months ago

Elephants are dying in Africa due to drought and, starvation and Another Great One has passed.
News
3 months ago

Senator demands reasons for the inactions of KWS in dealing with the interminable destruction of food
News
3 months ago
Post a comment
WATCH: The latest videos from the Star
by GERALD MUTETHIA Correspondent, Meru
Eastern
02 November 2022 - 22:00
Read The E-Paper