Governor Mbarire has promised to get to the bottom of the cause of the fire. 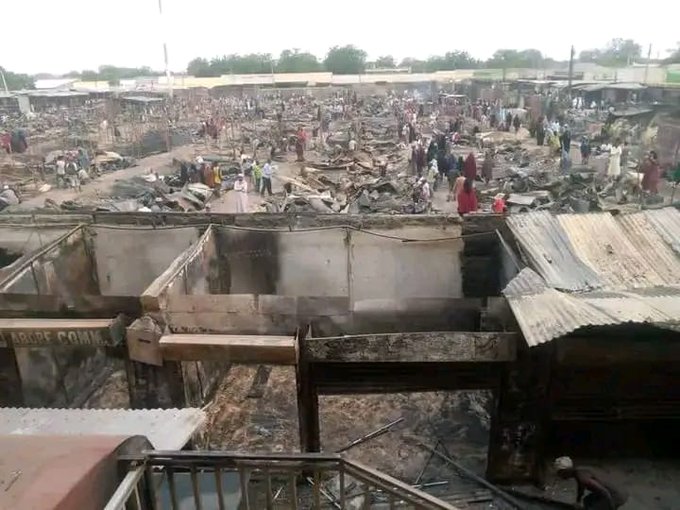 RAZED: The aftermath of the fire incident in Wajir town.
Image: FILE

The Sunday morning house fire that killed seven family members in Embu county could have been an arson attack.

Charles Kariuki, his wife Catherine Wanjiru, daughters Judith Wanjiku and Mary Ann Murugi and their son Joel Njeru all died in the blaze alongside Tumaini Blessing and Mbaraka who are grandchildren of Kariuki.

Kariuki's father Benjamin Njeru on Monday claimed the fire was a result of an arson attack. He said unknown people had two weeks before the incident attacked one of the victims on her way to work.

Njeru, who spoke at his Ngimari village home, said his daughter-in-law Catherine was attacked by unknown people on her way to work leaving her with injuries, and this could have had a link to the fire incident.

He said that Catherine had a hotel business in Runyenjes town about 5km from Ngimari.

However, he called for faster investigations to identify the cause of the fire as the previous attack could be as a result of the tragedy.

Governor Cecily Mbarire has promised to get to the bottom of the cause of the fire, saying she had asked police to speed up investigations into the matter.

She said the wooden house that was burned down was not connected to electricity nor did the family have a gas cooker that could have triggered the fire.

Mbarire also said the former administration left all the fire trucks grounded, making it difficult for them to effectively respond to fire emergencies in the county.

She assured Embu residents that her administration would ensure that all the fire trucks are brought back to ‘life’ so that they can respond to fire emergencies in the county.

The governor said the county would also reconstitute the county emergency response team and ensure each subcounty is allocated fire trucks to always be on standby in case of such emergencies.

“My administration is going to reconstitute the county emergency response team and we will ensure that each subcounty is allocated fire trucks to always be on standby in case of any fire emergencies,” Mbarire said.

"We are saddened by the bad news that we have lost seven members of the same family through fire. The cause of the fire has not been established though the police have launched investigations,” she said on Sunday.

Various leaders who mourned with the family condemned the incident and urged the police to speed up investigations.

Woman Representative Pamela Njoki and Runyenjes MP Erick Muchangi have urged residents to volunteer any information regarding the cause of the fire to forward it to security agencies to help in the investigations.

"It is a sad moment for everyone and I take this moment to pass my sincere condolences to the family and friends," Njoki said.

The seven bodies were taken to the Embu Level 5 Hospital mortuary, awaiting postmortem.

Deputy Governor Kinyua Mugo who visited the family also linked the fire to a possible arson.

Kinyua said the fire could not easily be attributed to an accident as the family had no gas cylinders inside the house or even electricity and family's kitchen is outside.

However, he said the county would stand with the family and offer assistance, including that for burial preparations.

The two aged four years and 20 months were sleeping at the time of the incident.
Counties
3 months ago

Her body was discovered in the morning by her grandson, who had come to assist her with chores.
Counties
2 months ago

Police commander says the minors were left in house by their father watching television.
Counties
3 months ago
Post a comment
WATCH: The latest videos from the Star
by BENJAMIN NYAGAH
Eastern
03 October 2022 - 22:00
Read The E-Paper