Azimio La Umoja has won majority of the parliamentary seats already announced in the region.

•In Kitui, more Wiper MPs on Thursday retained their seats in the results by the IEBC. 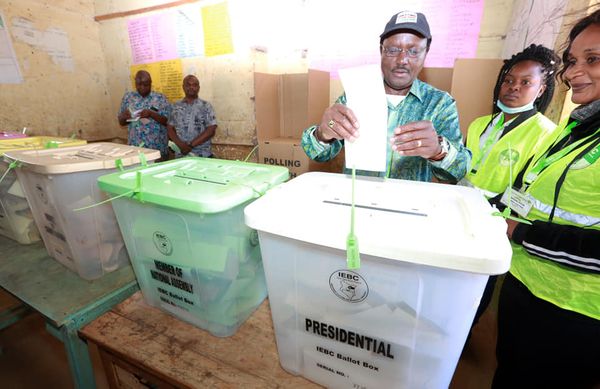 In Kitui, more Wiper MPs on Thursday retained their seats in the results announced by the IEBC.

Former Governor Julius  Malombe of Wiper was leading in the ongoing tally and his close competitor Jonathan Mueke has publicly conceded defeat.

The MPs are Wiper’s Makali Mulu of Kitui Central, Edith Nyenze of Kitui West Paul Nzengu, who is the MP for Mwingi North.

Kitui East’s Mbai reclaimed back his seat by getting 22, 273, flooring seven challengers.

Nzengu described political competition as a game just like pool-table and draught games where both winners and losers sit together for a cup of tea once the game is over.

“I would also like to tell my competitors that it was just a game. It is over now. It is time for me to continue working and there is always another opportunity. Let us maintain peace and harmony as indeed there is no war," he said.

“It was just like any other game. I play pool and draught even with my son and we play to win. Once we have won we go back and have a cup of tea. I therefore invite my competitors whenever the opportunity arises for us to have a cup of tea,” he said on Wednesday night.

Nzengu dethroned Munuve as the Mwingi North MP in 2017 and a bid by the latter to recapture the seat in the last Tuesday’s polls failed when Nzengu was declared the winner by the Mwingi North returning officer Martin Malonza.

Mueke acknowledged that the election was run with a level of political maturity that shows the strides we have made as a democracy and as a people.

"Kenya is truly poised to be an economic and political powerhouse on our continent. Because of my desire to serve Kitui and the people of Kenya, we have over the last 2 years ran a spirited race for Governor," he said.

"A race founded on integrity, honesty and goodwill to do the right thing for our people."

Mueke said he visited every corner of the county and met with thousands of people.

"The elections came and the people of Kitui have decided they would like someone else to lead them. A decision I fully respect," he said.

"To all our supporters who have walked this journey with us, I thank you. To Steve Kilungya my running mate and our entire campaign team, I thank you."

He congratulated the incoming Governor of Kitui, who has not been announced.

Post a comment
WATCH: The latest videos from the Star
by MUSEMBI NZENGU News Correspondent
Eastern
11 August 2022 - 23:00
Read The E-Paper