Over 12,000 Isiolo residents to benefit from new borehole 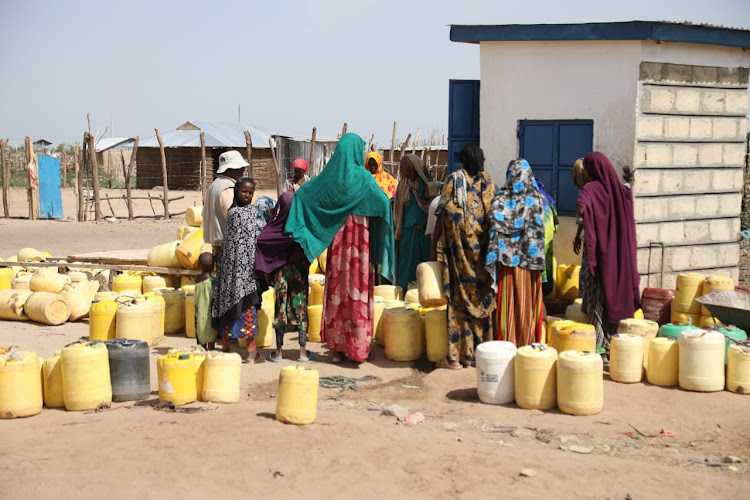 It's a sigh of relief for hundreds of residents in the arid areas of Isiolo who had to contend with walking for kilometres in search of water after a  borehole was commissioned.

The Sh96 million Merti- Koropesa borehole produces 49 cubic metres that is equivalent to 320,000 litres and can supply water to 12,600 residents in Matarba, Merti, Saleti Koropesa and Marcagara.

The community provided land for construction of the water intake and storage tanks.

Nzomo said apart from Merti Koropesa, NDMA  has also supported resilience building interventions in Isiolo. These include Sh15 million Mokori water pipeline in Oldonyiro and lining of 2.85km feeder canals  at Rapsu irrigation scheme in Kinna ward among others.

"The residents were suffering and they had to trek for kilometres to go and look for water in boreholes dug by hands. It was very tough especially for pregnant women," Bahari said.

Bahari said the project had been proposed earlier but it failed to be implemented because some people raised issues saying the project would lead to conflicts.

"There was also an excuse that the project could not be implemented because of Mathenge weeds and I asked if a water project can be done in Aberdare forest, why not here," Bahari said.

He said the community used to bring water trucks spending millions per year.

Bahari said the community was very happy with the project which he said could last for 30 years.

Healthcare and drought problems will be given priority – Doyo

Former Isiolo Governor Godana Doyo said this when he unveiled his manifesto in Isiolo town.
Counties
2 weeks ago

PS says the state is working to ensure all Kenyans have ease of access to water.
Counties
3 weeks ago