Kalonzo said the cleaning of the river will be Raila Odinga's priority.

•Kalonzo said the river's cleaning will be Raila Odinga administration's priority if Azimio one Kenya Alliance wins the August 9 polls.

•He said this will ensure that the residents' health was safeguarded alongside making viable two key infrastructural projects; Thwake Dam and Konza Techno city which will rely on the river's waters. 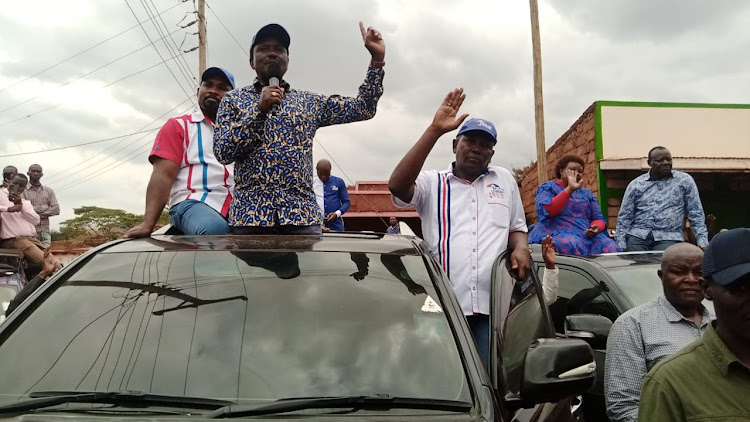 Kalonzo said the cleaning of the river will be Raila Odinga's priority if Azimio-One Kenya Alliance wins the August 9 polls.

He said this will ensure that the residents' health was safeguarded alongside making viable two key infrastructural projects; Thwake Dam and Konza Techno city which will rely on the river's waters.

"One of my roles as a Chief Minister in the Azimio government will be to ensure the river's clean-up," Kalonzo said.

The Ukambani kingpin addressed the public during a political rally to drum support for Raila's presidency at Ikalaasa market in Mwala, Machakos County on Thursday.

He said it was unfortunate that President Uhuru Kenyatta's administration had dragged its feet on the matter even as residents along the river continued to use the polluted water for irrigation and domestic use.

Kalonzo said some of the residents had contracted diseases whose origin could be traced to the water contaminated with industrial wastes.

"As we flew here we saw farmers growing all sorts of produce along River Athi, but the danger is that the water is polluted with industrial waste and pathogens which can cause diseases including cancer," Kalonzo said.

He said the river which would supply water to Thwake Dam and the Konza Technocity was also a vital lifeline to communities across several counties and needed to be prioritized because of its immense potential to create jobs.

Former Yatta Member of Parliament Francis Mwangangi who led a committee of Parliament that came up with recommendations on the cleaning of the river in 2016 said the process had stalled at the inter-ministerial committee level and hoped the new government will kickstart the same.

"In the 10th Parliament, we recommended for the clean up of the Athi River which is heavily polluted but the process has stalled. It would be futile to proceed with the construction of the Thwake dam unless the river is cleaned," Mwangangi said.

Mwangangi, Wavinya Ndeti's running mate, said Kalonzo had tirelessly lobbied for the implementation of both the Thwake dam and the Konza Technopolies City project which will ensure job creation for thousands of people adding it was now time to put into place a government that will ensure the successful completion of the projects.

The leaders including Machakos Senator Agnes Kavindu, Woman Representative Joyce Kamene, Wiper Mwala MP candidate Barkley Mutinda and MCA candidate Ken Mung'ala made an impassioned plea to the people to elect leaders in the Azimio Alliance in order to form the next government and actualize the pledges they had made to the people.

Kalonzo slams Ruto over debate, asks him to share land

He challenged the deputy president to hand over parts of land he owns.
News
2 months ago

The News Brief: The Mudavadi, Kalonzo factor in Raila vs Ruto duel