Some 181 children, who suffer from autism and cerebral palsy will benefit

• The school's headteacher said having started in 2015, the school had accrued an outstanding water bill of Sh194,000.

• "Keeping these children clean and well fed was a big challenge. We had to buy water at Sh20 for every 20 litre jerrycan needed," she said. 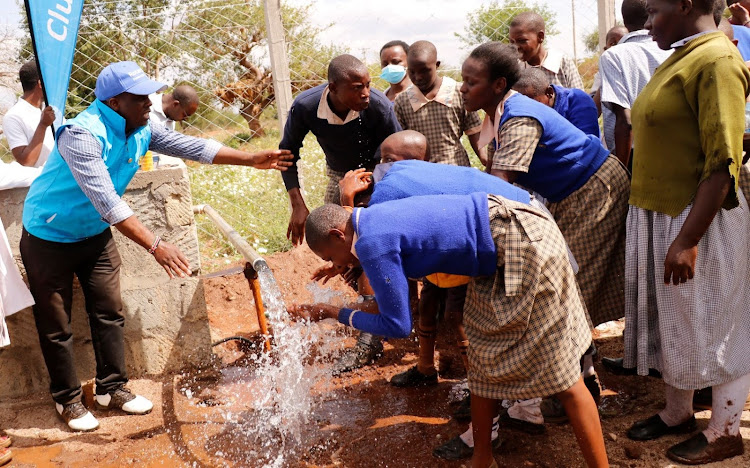 QUENCHING THIRST: Children at Kyatune Special School relish in water that gushed out after the Sh5.8 million water project was commissioned by the Rotary Club of Kitengela in Kitui on Sunday, June 19.
Image: MUSEMBI NZENGU

The Rotary Club of Kitengela has commissioned a Sh5.8 million water project for the Kyatune Special School fraternity in Kitui to end water scarcity.

The school's headteacher Anna Mumo said the solar- powered water project will reduce the high cost of providing water to the 181 children, who suffer from autism and cerebral palsy.

She spoke on Sunday during the commissioning of the project by the president of Rotary Club of Kitengela, Timothy Kiteng'e.

Mumo said the school community had suffered for years before the rotarians came to its aid.

She said having started in 2015, the school had accrued an outstanding water bill of Sh194,000.

The headteacher said the situation was aggravated by the fact that the children's state does not allow them to fetch water from the communal source.

Mumo said the water provision is a heavy burden heaved from her shoulders and that of the entire school fraternity.

"Keeping these children clean and well fed was a big challenge. We had to buy water at Sh20 for every 20 litre jerrycan needed. Today, we are happy because we are blessed with a reliable source of water," she said.

The headteacher said the project is life changing.

She said besides selling water to the local community at subsidised cost, the school will start small-scale irrigation farming and grow maize and vegetables.

"We shall utilise the water for income generation and self-reliance through food production. We will have a rotarian heart and share the water with the community. We have relied on them for years," Mumo said.

Water from the borehole is pumped using solar energy to an elevated tank. It then flows by gravity to fill tanks at the school, 1.9km away.

The rotarians have ensured the water is treated before consumption.

Kiteng'e said the Rotary Club of Kitengela was touched by the plight of the school, when it learned about the biting water scarcity.

"We are happy to hand over the project to the school and the local community. It will go a long way in alleviating their suffering," he said.

The president said the project was made possible with donations from other rotarians mainly from Sweden, who contribute to the Rotary Foundation.

He said the cost of running the project is minimal.

"We will also have monitoring and evaluation sessions, to see the progress of the project. We want the community to get maximum benefit from the project,” Njeru said.

Says the current Sh40 billion is not enough to increase coverage.
News
3 months ago

Project expected to end perennial flooding that has caused loss of lives, property in the Kano plains for decades
Counties
4 days ago

CHUMO: Rising up from drought together

Kenya’s water resources, as in other parts of the world, are facing many challenges, including climate change
Opinion
2 months ago
“WATCH: The latest videos from the Star”
by MUSEMBI NZENGU News Correspondent
Eastern
21 June 2022 - 22:00