Kalonzo, Ngilu and Kibwana says region has vowed to cast their presidential votes in one basket. 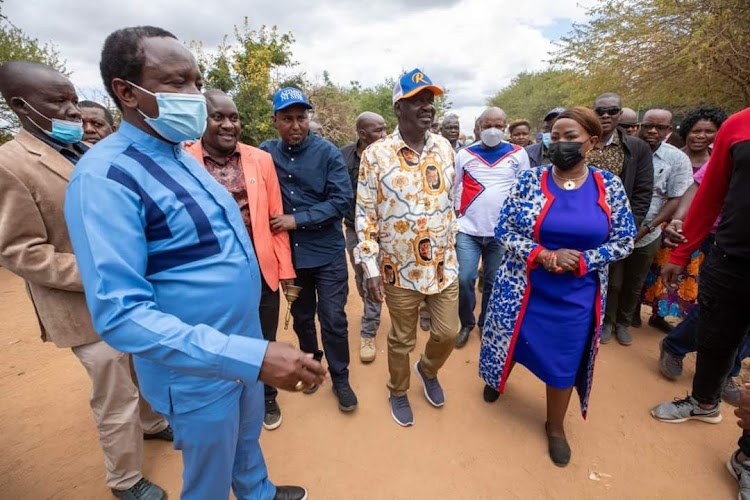 Kalonzo said his return to Azimio means the entire region has vowed to cast their presidential votes in one basket.

"Ukambani is united. The mission is one, to make Raila become the 5th president, " Kalonzo said.

He spoke during Azimio rally at Mtito Andei in Makueni county on Tuesday.

"We are on a very serious mission, it's Raila we are seeking his votes in these rallies, " Kalonzo said.

The Wiper leader cautioned local leaders against taking advantage of the rallies to fight their opponents and create chaos.

"A few people should not spoil Raila's meeting. Let's respect Raila, we recognise all of you but today is Raila's day," Kalonzo said.

The Ukambani kingpin said the Azimio candidate has good plans for the country as outlined in his recently launched manifesto.

He urged Raila to solve the boundary disputes between  Mtito Andei and Taita Taveta once he ascends to power.

"The boundary disputes between Makueni and Taita Taveta involve elders and we will have a meeting for a solution," Kalonzo said.

"This is why Mtito Andei has not grown as strong as it should. It could have been a big town now."

Kalonzo said the Kenya Wildlife Service boundary at Mtito Andei is also an issue because of persistent human-wildlife conflict.

The leaders will also held rallies at Machinery, Kibwezi, Nunguni and Mbooni in Makueni.

Kitui Governor Charity Ngilu told politicians to be focused on campaigning for Raila.

She said the presidency was the most important and the community should be focused on being inside the next government.

We have come to support Raila the 5th and all votes must go to him, " Ngilu said.

She urged other political parties within Azimio to drum support for Raila instead of fighting among themselves.

"Raila will need MPs and MCAs, I urge Wiper leaders and others to sit down and agree on one candidate in various political seats across Ukambani," Ngilu said.

"If you are with Kalonzo, Ngilu and Kibwana, Ukambani is locked for you. We voted for you 88 per cent in 2017 in Makueni, this time it will be over 95 per cent, " Kibwana said.

Raila thanked Ukambani residents for voting for him in 2013 and 2017.

"We are back with Kalonzo in Mtito Andei, the last time we were here with Kalonzo you voted very well for us but our vote was compromised in Nairobi," Raila said.

"We shall offer solutions for all the boundaries issues and KWS."

Raila said farmers from the Ukambani region will grow cotton since his administration will establish textile industries for job creation.

You don’t vote in Machakos, focus on campaigning for Raila, Waita tells Kalonzo

His remarks came after Kalonzo endorsed Wavinya Ndeti for the Machakos governorship.
News
5 months ago

Kalonzo: Stop speculating on what Kamba region will get, I'll sort it out with Raila