Rally behind Kalonzo and his leadership — Senator Wambua

Says the latest development in the Ukambani political landscape is a journey meant to last beyond August 9.

• He said Kambas should follow Kalonzo in the political direction that he would show them, including his position to support Raila

• Wambua said the importance of placing Kamba's in national politics is that the discourse on the next government cannot get underway without the Kamba nation. 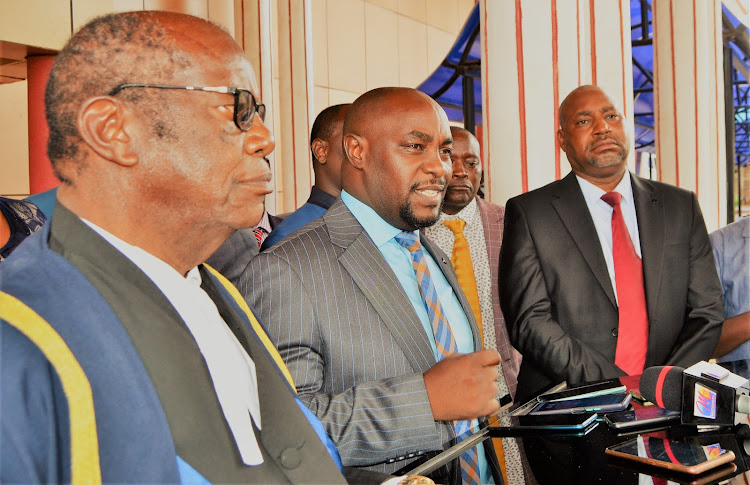 He said Kambas should follow Kalonzo in the political direction that he would show them, including his position to support the Azimio-One Kenya presidential candidate, Raila Odinga.

Wambua spoke during a press conference at the Kitui assembly on Tuesday.

He was accompanied by speaker George Ndotto and Makueni speaker Douglas Mbilu.

Wambua said the latest development in the Ukambani political landscape is a journey that is meant to last beyond the August 9 election.

"For this journey to continue to the desired destination, as a community we must take cognisance that Kenyan politics is structured in a way that every community has leadership and a dominant political party," he said.

The senator said he was among people who managed to make the Kamba community politically relevant and thus earn a place in the national politics.

“I want to thank God most sincerely because today, there is nobody who can talk about the next government without mentioning the Kamba nation.

“I am proud to be a member of the community and of having taken part in the talks that have placed us where we are today,” he said.

Wambua said the importance of placing Kamba's in the national politics is that the discourse on the next government cannot get underway without mentioning the Kamba nation.

The senator however said putting Kamba's into play has not come without a price.

“The people who were at the forefront of these negotiations have taken a lot of insults and threats,” he said.

Wambua further urged all aspirants in Kitui to pursue the peace agenda.

He said it did not pay for brother to raise against brother on account of having taken different political directions.

"Those who pursue their political agenda in different political parties must be given the space to address our people. At the end of the day our people will make up their minds," Wambua said.

Kalonzo: This is five-star manifesto, I pledge to fight for you

He said the launching time is a clear indication that Kenya is ready for a 24-hour economy.
News
6 months ago

It was Kalonzo's first campaign rally with Raila since rejoining Azimio.
InPictures
6 months ago