They surrendered two Ak-47 assault rifles and a G3 rifle, with 14 bullets 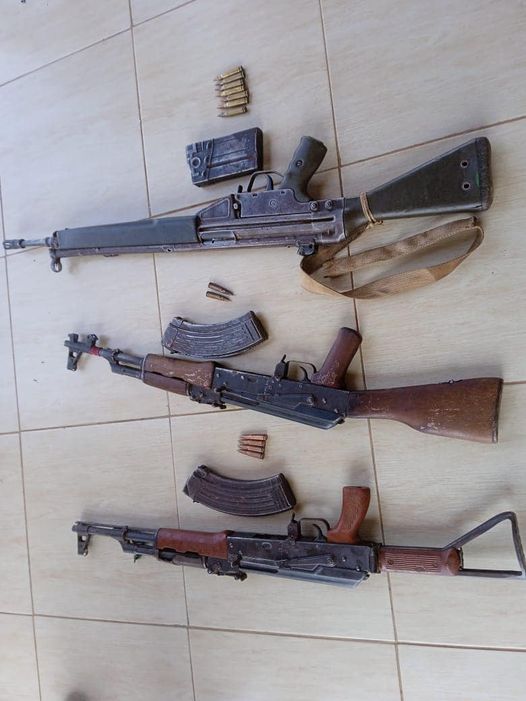 OPERATION REJESHA AMANI MARSABIT: The three weapons that were surrendered in Turbi, Marsabit on Friday, May 13.
Image: NPS

Through their chief Joseph Jirm, the elders surrendered two Ak-47 assault rifles and a G3 rifle, with 14 bullets on Friday.

The residents were heeding a call by the government to embrace peace as the surest way of assuring sustainable development.

This is part of an ongoing Operation Rejesha Amani Marsabit aimed at restoring peace and security in the area and neigbouring Isiolo county.

The security team conducting the operation is now in possession of 14 assault rifles, a general purpose machine gun, 617 rounds of assorted ammunitions and other crude weapons illegally held by residents.

The recoveries were made in various subcounties of Marsabit between May 10 and 13.

Police and administrative officers in the operation agreed to sustain awareness forums aimed at urging residents to voluntarily surrender arms.

They say the operation is not meant to target any community but to fish out criminals in the entire county.

More than ten suspects are facing various charges in connection with the recoveries made so far and killings that have happened in the area.

It is believed the guns were behind some of the attacks witnessed in the past months, which left a trail of deaths and displacement.

The exercise has seen calm return to the region with almost nil incidents being reported in the past weeks, police said.

The month-long operation started on May 2 and will be extended ended to Sololo where suspected Oromo Liberation Front militias are active.

Other areas include Kom and Merti in Isiolo county.

The curfew is to allow the security forces deal with criminal activities there.
News
2 months ago

They went missing after an ambush on government officials that left five dead.
News
2 months ago