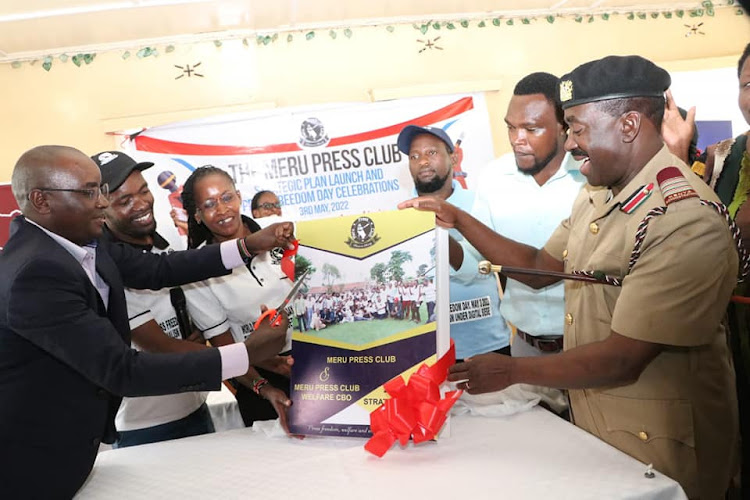 Journalists have been urged to always fact-check information and ensure objectivity.

“We offer guidance and training especially now that we are heading to elections. We stand firm when it comes to protection and welfare of journalists. If you raise your voice, we must stand with that voice,” he said.

Mureithi was among guests at the launch of the Meru Press Club's five-year strategic plan at Gitoro Pastoral Centre. He urged leadership of the club to liaise with the guild for grants and donor funding to actualise the five-year plan.

Mureithi said leaders who fail on their mandate must be put to task.

“We don’t fight national or county governments or authorities but we must put leadership to task if we see they are not working well,” he said.

Meru Press Club plans to open a media centre within the five-year strategic plan, insure its members and empower their members economically.

The club chairperson David Muchui said poor remuneration, sacking of journalists and impact of Covid-19 brought about the idea to establish the club.

“Some politicians capitalise on popularising themselves in electioneering period. We are aware some even hire goons to attack journalists who they feel are not aligned to them or aired a story that does not favour them," Machui said.

Alex Njeru from the Tharaka Nithi Press Club said press freedom should be prioritised by all leaders.

Meru county commissioner Fred Ndunga said journalists have a responsibility to keep leader on their toes but endeavour on reporting facts.

“I am aware what is sensational sells faster but why would you burn the country like it happened in 2007. My office and that of our county police commander and even at subcounty levels are open, seek official clarified information,” Ndunga said.

May 3, was set as the official day to mark the World Press Freedom Day, in 1993, by UN.
Counties
1 month ago

Kenya's media habitat can be better

Use of state advertising as a carrot and stick against 'errant' media house has muzzled free speech.
Opinion
1 month ago

The number of powerful and influential people hard at work to force and influence editorial decisions to selfish ends is growing.
Opinion
1 month ago
“WATCH: The latest videos from the Star”
by GERALD MUTETHIA Correspondent, Meru
Eastern
04 May 2022 - 22:00