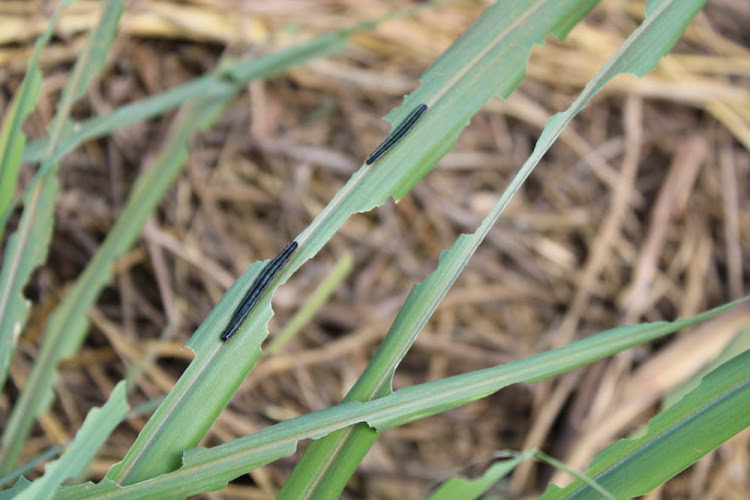 ARMY WORMS Some of the armyworms that have highly destroyed crops in Kitui West subcounty
Image: LINAH MUSANGI

Maize farmers in Kitui West subcounty are staring at losses after fall armyworms invaded their farms, destroying tens of acres of the crop and pastureland.

The worms have extensively devoured stems and leaves of the young crops and diminished grass, thereby threatening food security for both the residents and their animals.

The residents said the worms were spotted about a week ago but nobody paid much attention until they swarmed their farms.

John Sandi of Matinyani village said the African armyworms had destroyed almost his entire maize crop forcing him to re-sow.

“The worms ate down all the crops leaving my shamba bare. We are staring at possible food shortage if we don’t receive adequate rains,” he said.

"Officers from the Agriculture ministry visited our farms to assess the extent of the crop damage and have issued us with insecticides for eradicating the worms,” she said.

Kitui chief officer for Agriculture Kioko Kiilu said the county is committed to assist the farmers in dealing with the armyworms' invasion to avert food insecurity.

“We urge the farmers to remain calm because we will support them in every possible manner to ensure total eradication of the destructive insects,” he said.

Farmers to benefit from launch of pest, weed identification app

The app was introduced in Kenya owing to high internet connectivity rates.
News
11 months ago
“WATCH: The latest videos from the Star”
by LINAH MUSANGI None
Eastern
14 April 2022 - 22:00