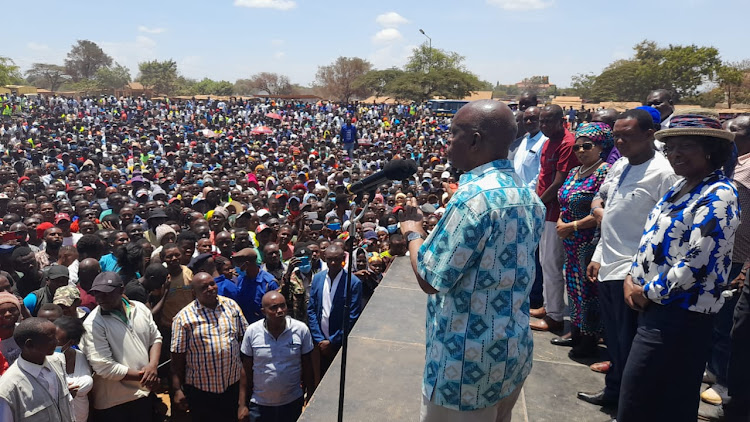 The three Ukambani governors are seeking to intensify support for the Raila Odinga-led Azimio La Umoja in lower Eastern.

They addressed a series of rallies in Makindu, Kikima and Mbumbuni in Mbooni subcounty where they declared their resolve to rally the community behind Raila on his bid to State House.

Governor Kibwana said his endorsement was out of his trust for Raila who has always been passionate on strengthening devolution and ending marginalisation in Kenya.

"Raila is a trustworthy leader who will bring about quality leadership and reengineer the country's economy," he said.

Kibwana added that Raila served best in Mwai Kibaki's government and thus he has the capacity to drive the country to a better place if trusted with our votes.

"I was a legal advisor for Kibaki and that gave me the privilege to mingle with Raila, so I can place my bet on him," he said.

While commenting on his Deputy Governor Adelina Ndeto Mwau who moved to UDA, Kibwana insisted that his deputy moved alone and that Makuenians are not with her.

His counterpart Ngilu said Kambas were tired of staying in the opposition for ten years.

She said being out of government had cost the region immensely in terms of development.

"Enough is enough, we as the Kamba community have to be in the next government which will be formed by Raila under the Azimio La Umoja Movement," she told the rallies.

Ngilu said, by joining Raila's quest, the region's electorate sought meaningful representation in cabinet, increased resources, opportunities for professionals and shared prosperity with the rest of the country.

Mutua however, accused Wiper leader Kalonzo Musyoka of attempting to auction his people for selfish gains.

He termed his move of not joining Azimio as detrimental to Kambas endeavor to be in government.

Azimio has businessman Lloyd Masika as their gubernatorial candindate.

They said Ruto is a self-seeking, political trickster who Kenyans cannot afford to entrust with the country's top leadership.

Maanzo was speaking at Parliament buildings on Wednesday afternoon.
News
5 months ago

Raila's jumbo coalition to be unveiled on February 26

Envisioned alliance said to be bigger than Narc, include at least 19 parties.
News
6 months ago

Kanu and Wiper will hold NEC meetings next week on Wednesday.
News
6 months ago
“WATCH: The latest videos from the Star”
by VERONICA NTHAKYO
Eastern
17 February 2022 - 22:00