Each beneficiary is expected to receive 15kgs of rice, 6kgs of beans and a litre of oil 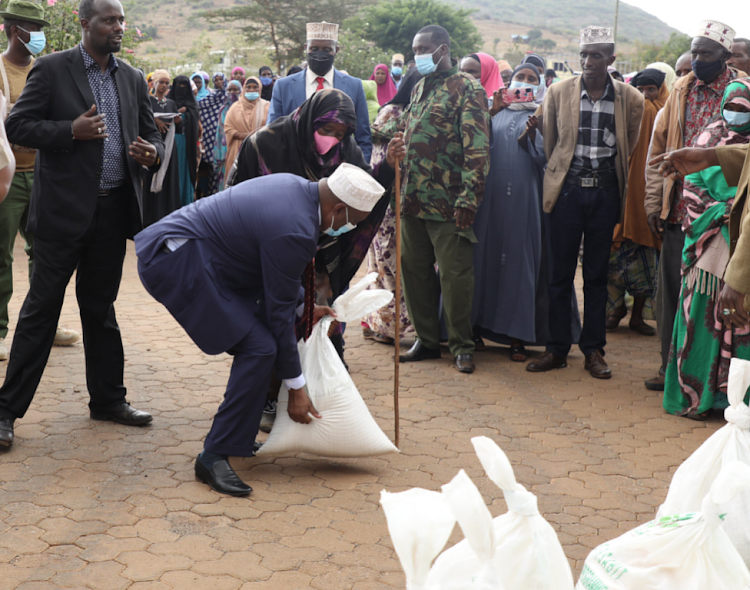 While flagging off relief food on Monday, Marsabit Governor Mohamud Ali said his administration has deployed resources to assist affected households with food.

Each beneficiary is expected to receive 15kgs of rice, 6kgs of beans and a litre of oil.

The county boss said the current drought worsened the situation as many households can't afford to put food on the table.

"Despite the effort from the county government, the interventions that are necessary to save the lives of our people are immense," he said.

Asha Halakhe, 60, a beneficiary of the programme from Saku constituency urged the governor to continue with the assistance.

She also urged residents to coexist peacefully saying the insecurity witnessed in Saku has affected residents and brings down the county's economy with businesses closing by 6pm.

While urging residents to live in harmony, Governor Ali emphasised the need to beef up security across the county.

He also urged the security agencies to reconsider the ban on boda boda and probox saying it will affect county's economy.

According to the governor, commercial cyclists play a key role in the transport sector. Many families, he says, depend on boda boda for daily upkeep and the ban will render youth jobless.

He said hundreds of youths who operate boda boda have successfully changed their lives and the ban will reduce them to beggars.

Drought may cause Narok to miss voters' target

IEBC urged to extend registration in drought areas as pastoralists have moved.
Counties
3 months ago

The wild animals have for the past two months been raiding farms on a daily basis.
News
3 months ago
by ABDIKADIR CHARI
Eastern
18 January 2022 - 22:00