Cop shoots man in Nkubu for not wearing face mask

Karani claims the officer demanded a bribe from him, which prompted the shooting 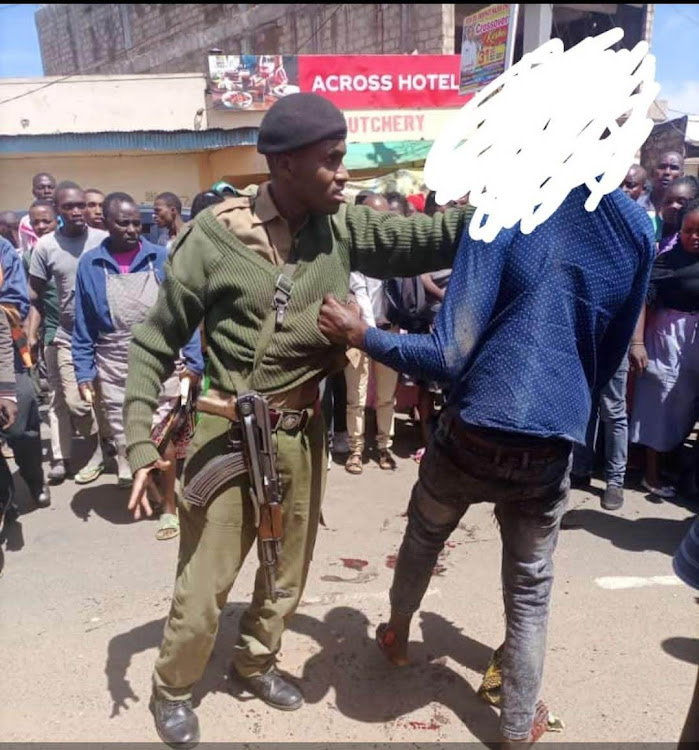 The officer and Phares Karani during the alleged confrontation.
Image: Sourced by Dennis Dibondo

A police officer in Nkubu, Meru county, on Thursday shot a man after an argument over not wearing a face mask.

The incident happened at 3pm on Tuesday after Phares Karani, 23, went to open an account with the Solution Sacco in Nkubu town.

"I forgot to wear my mask so the police officer stopped me, and asked me to get buy a mask before I enter the Sacco building. I complied and went back and bought a mask and came back to open the account."

Karani said the police officer demanded a Sh1,000 bribe but did he not have such an amount.

He spoke to the press at his hospital bed in Consolata Hospital Nkubu, where he was rushed after the incident attracted a crowd.

"When he [the police officer] went to inquire [about why Karani was not wearing a mask], he slapped him [the officer], and after  a brief argument the bullet from the officer's gun shot the man accidentally," Maronga said.

"There was a brief push and pull and the bullet accidentally hit the man."

He said  the police officer called an ambulance that rushed the man to hospital.

He said they are investigating the incident.

The police boss said the police officer is still  in custody.

"We are still conducting investigation into the matter," Maronga said.

Solution Sacco confirmed the incident but said the man was shot 100 metres from the premises, and that they not aware of what happened. They declined to comment further comment on the matter.