Some of the most used pesticides are recommended for a ban; farmers say alternatives are ineffective

•Judicious use of pesticides is part of the Integrated Pest Management.

•M'Mbijjewe said Africa uses much less pesticides and fertiliser per hectare than Europe and the calls for reductions in Europe are not reflective of Africa’s situation. 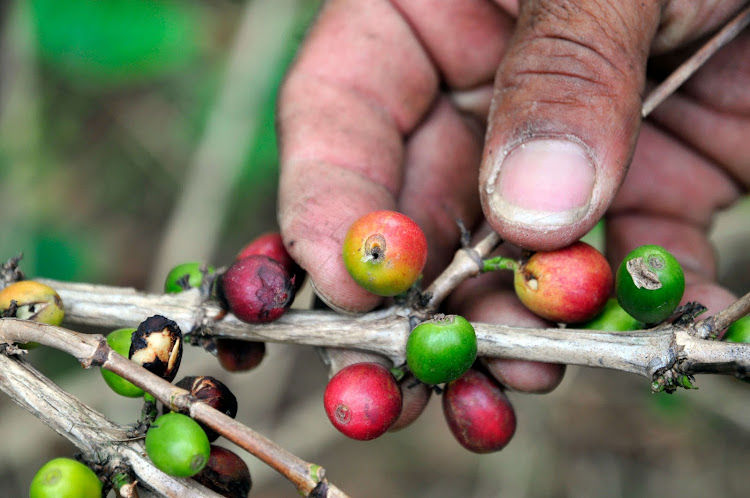 AFFECTED: The best pesticides used to control the coffee berry borer all contain Cypermethrin and  Chlorpyrifos, the two ingredients recommended for a ban in Kenya.

For more than 30 years, Joseph Nyaga’s two-acre coffee farm in Embu County has meant everything to him.

Without it, he would have been unable to send his four children to school, he says. The last born completed university in 2019.

Nyaga, a 69-year-old farmer who never held a formal job, has been following the debate on pesticides for two years now.

After interaction with a marketer from a biopesticide company in October last year, he decided to try two products against the stubborn coffee berry borer.

This is the most economically important coffee pest in Kenya and can cause up to 80 per cent damage if uncontrolled.

The pests spend most of their life cycle inside coffee berries. In a bad infestation, they will completely destroy the berry so that all that remains is just their faeces.

“This makes it difficult to control, except with pesticides,” says Njiru.

“I tried several biopesticides offered to me. One was a repellent said to be natural, which you spray on coffee the normal way,” he says.

He was also offered a fungus called Beauveria bassiana – a natural enemy of the borer – which you apply before the adult borer before bores into the berries.

“It was expensive and less effective when it rained,” he says.

“I am back to the [synthetic] pesticides I have used since I planted coffee in 1990,” he says.

The pesticides he uses to control the borer all contain Cypermethrin and  Chlorpyrifos, the two ingredients recommended for a ban in Kenya.

Judicious use of pesticides is part of Integrated Pest Management, a concept being promoted in Kenya. IPM refers to a combination of the most economical pest control methods, with the least possible hazard to people, property, and the environment.

Njiru says the talk of banning synthetic pesticides troubles him, as alternatives are expensive and not as effective.

He took part in a focus group discussion on the use of biopesticides, in Gaturi South in Embu, in 2019.

The outcome – a study titled “Why don't smallholder farmers in Kenya use more biopesticides?”  - was published in the Journal of Pest Management Science in May last year.

It was conducted by the Centre for Agriculture and Bioscience International (Cabi), a non-profit that promotes agricultural and environmental issues in developing countries.

Only 10 per cent of farmers intervewed preferred biopesticides over synthetic chemicals. “Although farmers viewed both pesticides and biopesticides as costly, they invested in the former due to their perceived effectiveness,” the study said.

Agriculture remains the most important economic activity in Kenya and absorbs about 60 per cent of Kenya’s workforce. On average 12,983 tonnes of pesticides are imported into the country annually, in various forms including insecticides (27 per cent), fungicides (45 per cent), herbicides (14 per cent), and other products such as acaricides, fumigants, plant growth regulators, miticides and biocontrol agents (14 per cent). They have a total value of Sh10.7 billion, according to the Pests Control Products Board.

The proposed ban is sponsored by several organic foods lobbies. Some have previously been accused of lying about pesticides use and using religious taboos rather than scientific evidence in campaigns.

In May this year, PCPB  constituted a task force to review toxic pesticides in response to a directive issued by the National Assembly Health Committee following the petition to deregister some pesticides.

The committee is yet to give its findings.

A product that has been vetted is first granted an experimental permit for local biological efficacy trials or other bridging trials.

“This is carried out in institutions that have been accredited by the board for various trials—currently [they’re] 62,” he said.

Such institutions include the Kenya Agricultural and Livestock Research Organization and the Ministry of Health.

Kinyua M'Mbijjewe, a food and agricultural consultant, told The Star the calls for the ban were strengthened by 'The European Green Deal', which the  European Commission published on December 11, 2019, calling for a reduction in the use of pesticides in Europe.

On March 9, 2020, the EU Commission and the European External Action Service published a joint communication proposing the EU's strategy with Africa.

“The EU is seeking to compel other countries, including Kenya, to adhere to new regulations if they want to continue to access its lucrative market,” M'Mbijjewe said.

M'Mbijjewe said Africa uses much less pesticides and fertiliser per hectare than Europe and the calls for reductions in Europe are not reflective of Africa’s situation.

He noted that Integrated Pest Management, which calls for farmers to try different measures in dealing with pest outbreaks, does not exclude the use of pesticides.

He said the bias that anything is better than insecticides or that IPM’s goal is to move to organic farming, is misguided.

“Insecticides are one tool in the farmers’ toolbox and as research continues to improve on other measures,” M'Mbijjewe added.

Njiru is a spray service provider, having received special training to apply pesticides.

“Most of the spray is actually water,” he says. “Farmers use very little pesticide. And if you have been trained, you use even much less. That should be safe.”

Post a comment
WATCH: The latest videos from the Star
by JOHN MUCHANGI Science Editor
Eastern
12 December 2021 - 23:00
Read The E-Paper