• Kofia said the ministry is conducting research on best breeds for certain areas before issuing AI and high-yielding milk semen.

• Kofia said President Kenyatta and Munya will commission the Kangetta KCC, however, if there won't be enough milk supply, the project will turn into a white elephant. 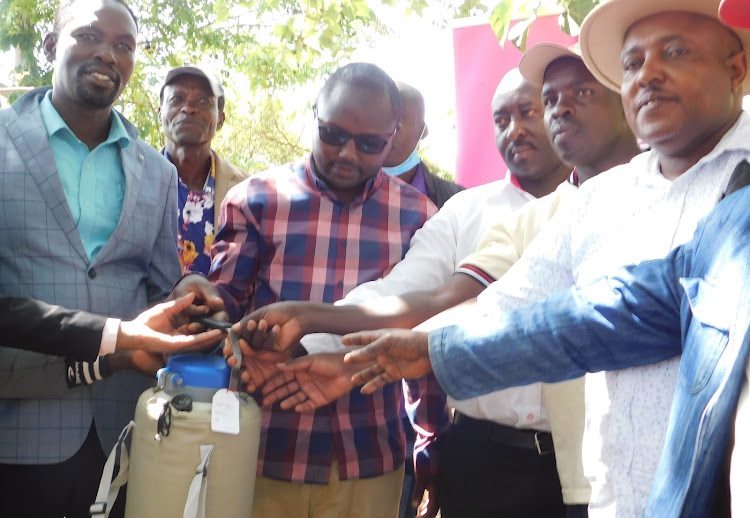 They said this will curb insecurity and cattle rustling on the county grazing zones especially in Tigania and Igembe.

The two spoke during an ongoing exercise to distribute portable liquid nitrogen cylinders for artificial insemination on Tuesday.

Kofia said President Uhuru Kenyatta and Munya will commission the Kangetta KCC, however, if there won't be enough milk supply the project will turn into a white elephant.

Karithi urged farmers to join cooperatives adding that the state cannot develop a whole project for an individual.

He said there is ready milk market hence the need for high breeds.

“When good things are coming they do have some challenges. Change cattle breeds to those with high yields," he added.

Kofia said the ministry is conducting research on best breeds for certain areas before issuing AI and high-yielding milk semen.

“We are issuing them to established and registered cooperatives. Meru people must improve their breeds to fetch good money from new KCC at Kangeta.

"We are also conducting awareness and training inseminators in readiness for supply,” he said.

James Murungi, a dairy farmer from Amugaa hailed praises to CS Munya for the AI services.

“I had ordered a Sh250,000 insemination from Mukuruini to improve my breeds. However, due to Munya’s new interventions, I have cancelled the order.

"Going forward, all of my dairy cows will be mounted with insemination breeds from the ministry,” Murungi said.

Kofia said dairy is crucial because it helps farmers to earn daily.

The PA said the CS will also issue coolers to farmers.

“The project was conceptualised after the ground breaking of Kangeta factory. It will create both direct and indirect jobs,” Kofia said.

"He killed cartels in milk, coffee, tea, importation of sugar and milk. Kiraitu Murungi’s administration, on the other hand, has really failed,” he said.

Karithi said “as we go into politics, Munya is coming home for the governor’s seat. We plead with people for support but also pray for him because there are plans for him to be deputy president.”