I will continue with big four agenda — Ruto

•Ruto said this is despite the programme facing challenges after distraction from ODM party leader Raila Odinga.

•He blamed Raila for the Jubilee fall out saying he diverted President Kenyatta's government focus on the big four agenda.

Deputy President William Ruto has vowed to continue with the implementation of the big four agenda once voted in as President.

Ruto said this is despite the programme facing challenges after distraction from ODM party leader Raila Odinga.

He blamed Raila for the Jubilee fall out saying he diverted President Kenyatta's government focus on the big four agenda and initiated the constitution amendments programme thus distracting the government.

Ruto spoke on Friday during his day two of the Embu county tour. He made stopovers at different towns.

He said most of the challenges faced by the residents were under the big four agenda and could be solved were it not for Odinga’s interference.

“In our second term with President Uhuru Kenyatta, we had planned to improve the lives of Kenyans through the big four agenda until we welcomed him in the government,” Ruto said.

“He came with his idea of the constitution amendment thus shifting our big four agenda focus.”

While at Ishiara in Mbeere North Ruto said during their first term they implemented several notable developments in the area. 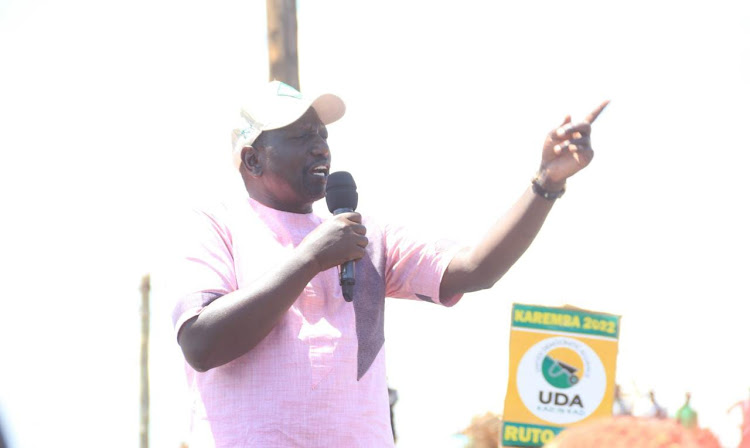 However, Ruto said he will make sure he achieves what they had targeted under the programme.

“Raila has wasted us for the four years he joined the government but I  assure you I will deliver what we had promised,” he said.

Ruto said next year, he will introduce Sh100 billion special programme for youths to ensure they are empowered for job creation.

He condoled with the families of victims of an accident where 11 people died at Muminji and promised to contribute Sh700,000 to help in burial preparations.

The leaders called on DP Ruto to prioritize introducing irrigation water in the lower region of the county once he forms the next government.

Led by Mbeere North MP Muriuki Njagagua, the leaders urged Ruto to ensure he brings enough water to ensure they benefit from farming and for sanitation within Siakago town.

“The biggest challenge is lack of clean water. I urge you to make plans and ensure our people get enough water,” he said.