•  “If it has proven hard for Nkuene Mitunguu to get a subcounty, let Igoji get one. We have been airing our grievances since 2011 but they fall on deaf ears,” Kanyatta said.

•  Kiraitu said he is not interested in local political fights. 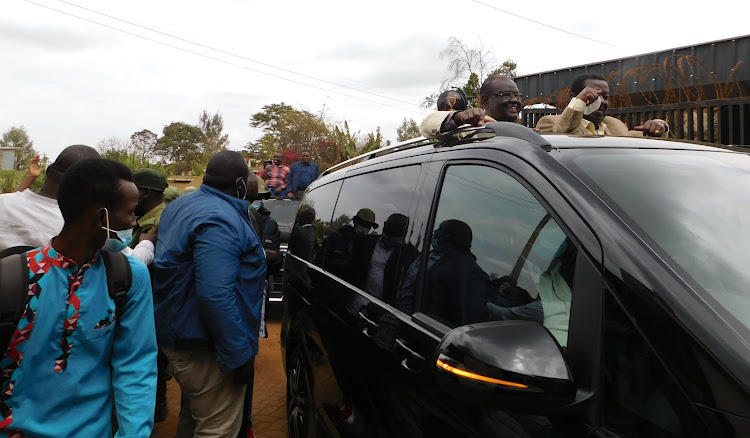 A section of leaders from Mitunguu and Nkuene Wards of South Imenti have accused Governor Kiraitu Murungi of jeopardising youths employment opportunities.

The leaders told President Uhuru Kenyatta and Interior CS Fred Matiang’i to consider population vastness of the constituency and gazette one or two of the anticipated subcounties.

They say vastness has denied residents a fair share of the government opportunities such teachers, police officers, Kenya Defence Forces recruits and Kenya prisons that are reserved for every subcounty.

Kanyatta said one man one vote is a pipe dream in South Imenti due to egocentric leaders fighting its people.

“If it has proven hard for Nkuene Mitunguu to get a subcounty, let Igoji get one. We have been airing our grievances since 2011 but they often fall on deaf ears,” he said.

Makasi and Muriungi said politicians allied to Governor Kiraitu are capitalising on the subcounty thus increasing stakes of residents being denied services.

“We won’t retreat or surrender. We would be happy if our youths are recruited to KDF, police and other cadres.

"We are making a condition that no politician will woe us to vote them if the new Mitunguu Nkuene subcounty is not gazetted.  Igoji people are in the same quagmire of a division,” Makasi said.

Karambu said they will not listen to excuses but hold demos to for the gazettement of the subcounty.

Gatobu said since 2018 when a public participation at Kaguru led to disagreements, the constituency has always lagged behind while small units with very few people like Mutuati were recently gazetted.

Kathuri and Jubilee politician Shadrack Mwiti have been rooting for Nkuene Mitungu subcounty while Meru chief of staff Gideon Kimathi, Kiraitu's close confidant is rooting for an East-West split of the constituency.

Kiraitu said he is not interested in local political fights.