You're not my boss, angry Munya tells off Kiraitu

• Kiraitu however said Munya should visit Meru more often to see for himself the transformation that has happened in Meru since he was  kicked out of office in 2017.

• The two are headed for a battle of Titans in 2022 Meru gubernatorial seat. 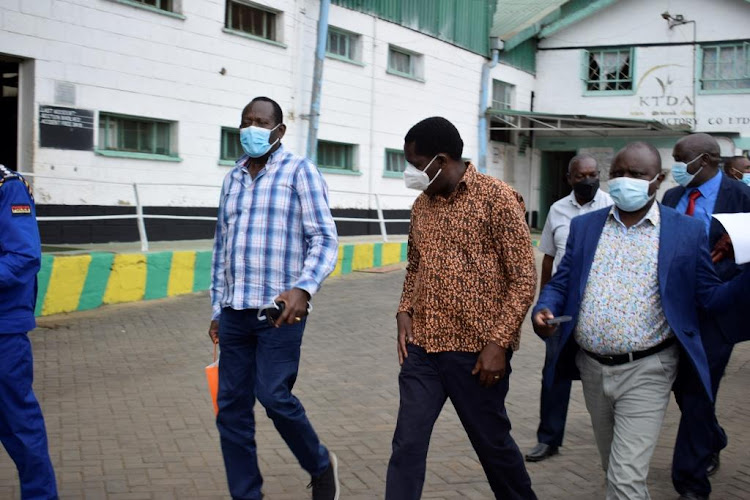 Agriculture CS Peter Munya has called on Meru Governor Kiraitu Murungi to concentrate on his development agenda instead of supervising his work.

Munya said he was appointed by President Uhuru Kenyatta as a Cabinet Secretary and does not expect any supervision from the county boss.

Munya said Kiraitu has failed to deliver in his four years in leadership and was looking for a scapegoat.

"He has lost his focus and is asking questions. Let me remind him I work for the whole country and not Meru county only. He is the one working for Meru," he said.

The CS said the county boss has lost touch with residents as he is not seen in the county to hear the people's problems.

Kiraitu however said Munya should visit Meru more often to see for himself the transformation that has happened in Meru since he was  kicked out of office in 2017.

"Just to mention a few of my government’s achievements; we have drilled and equipped 195 boreholes in four years compared to Munya’s 17 in five years.

"We have also, constructed 273 ECDE classrooms compared to Munya’s 100 in his entire term. We have completed 105 ECDE classrooms which Munya failed to complete," he said.

Kiraitu said in Munya's backyard, Muthaara ward, his administration has drilled and equipped eight boreholes since he came into office.

"We have also constructed many ECDE classrooms, markets and opened many kilometres of road in the same ward," he added.

The governor said when he was headed the Ministry of Energy it was ranked the second-best ministry overall. In contrast, Munya’s Agriculture ministry was recently ranked the worst performing ministry among all ministries.

"He has mismanaged funds for fighting locust invasion, tea, coffee, sugar and maize. He should also not forget that the people of Meru overwhelmingly rejected him in 2017 due to poor performance," he said.

The two are headed for a battle of Titans in 2022 Meru gubernatorial seat.

However, Munya has indicated he might pick a national seat if a good deal arises, raising speculation that he might be picked by one of the Presidential candidates in 2022.