• Mwenda was to report at the University of Nairobi on September 20.

• He has reached out to Abuthuguchi West MCA Patrick Muthuri who is organizing his admission with the little money from his family. 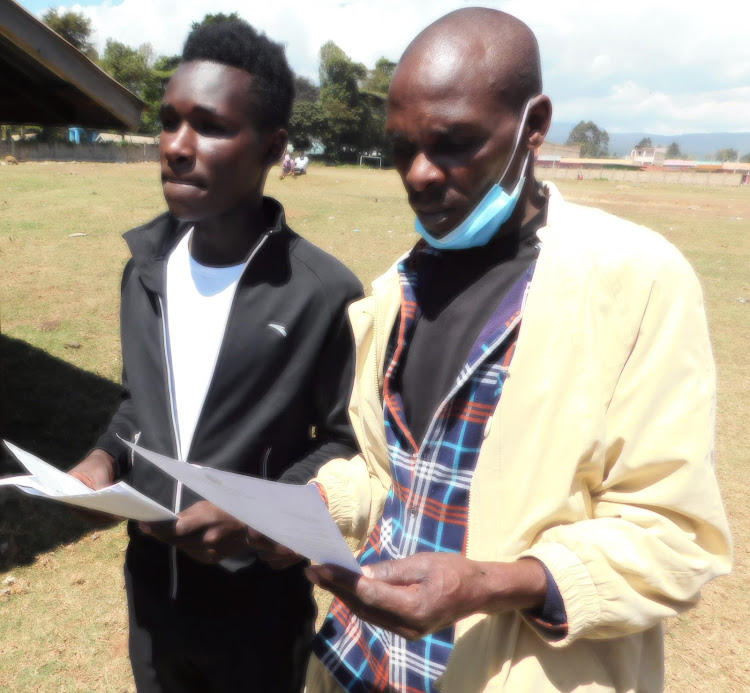 Nicholas Mwenda Murithi scored an A-(minus) in the 2020 Kenya Certificate of Secondary Education exam despite financial challenges due to his poor family background.

Murithi, despite a balance of over Sh30,000 in his secondary school, was hoping to join the university of his choice, but his career dreams seem to erode each coming day.

Mwenda was to report at the University of Nairobi on September 20 to study Actuarial Science. He has reached out to Abuthuguchi West MCA Patrick Muthuri who is organising his admission with the little money from his family.

“I ask well-wishers to buy him a laptop or smartphone to aid virtual learning. They are completely homeless, have no income and can’t invest in rearing rabbits or keep chickens” Muthuri said.

“I appeal to the county government to reconsider their decision to set aside special bursary funds to benefit university students.”

Mwenda, second born in a family of three who works as an M-Pesa attendant in Nairobi, has been struggling to live since their parents separated in 2010 following family feuds.

His mother, Harriet Rigiri, ran away from home with Nicholas and his two other sisters but one of them has already dropped out of school and depends on manual jobs like her mother in Baringo.

“My mother sells chapati at Tolmo quarries. I was in Standard 6 when they separated. I completed my Std 8 at Kimbo Primary School in Meru and attained 335 marks,” Mwenda said.

“I went to Karima Boys Secondary School and studied under the school's welfare. My elder sister dropped out of school, while the young one is at Philimon Chelagat Secondary school. I am unable to raise the money for university.”

Mwenda’s father, Kinoti Murithi, is homeless and jobless. He lives in Githongo market in Central Imenti.

Murithi told the Star that his son is bright, disciplined and God-fearing which boosted his performance despite many challenges.

“I was very bright. I attained 96 points but I dropped out of Chogoria Boys Secondary School after my single mother died in 1996. I was afraid that my son would drop out but luckily he did not,” Murithi said.

“I plead with well-wishers to chip in and educate my son. I am landless and jobless.”

Murithi said every day he picks his jembe and knocks on doors to get his daily bread but sometimes he is not lucky.