• Muturi said he was shocked by Kiraitu’s move to court his opponents. 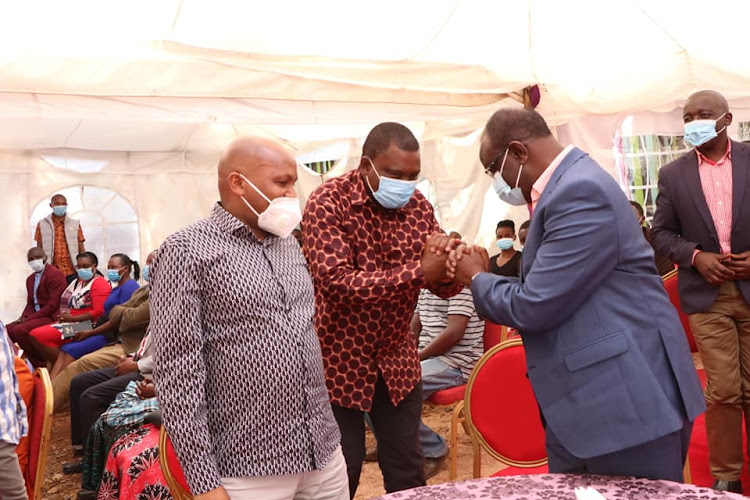 “My phone was overwhelmed by calls from many people all over the country after the Meru leaders meeting in Nairobi with ODM leader Raila Odinga," he said.

"I am impressed and we welcome all presidential aspirants to outline their manifesto and agenda to Meru people,” Kiraitu said at Nthimbiri village in North Imenti during the second death anniversary of his friend Edwin Kiongozi's mother.

Kiraitu assured National Assembly Speaker Justin Muturi, who was present, of his grassroots support even if he frequently invites other presidential aspirants for campaign meetings in Meru.

Muturi said he was shocked by Kiraitu’s move to court his opponents and contacted his close allies for to find out the true position.

Governors Kiraitu, Martin Wambora (Embu) and Muthomi Njuki of Thraka Nithi have declared they will support Muturi in 2022.

“We are scrutinizing all presidential contestants. This is why, we had deliberations with Raila and ANC leader Musalia Mudavadi. We will invite Wiper leader Kalonzo Musyoka and Deputy President William Ruto soon." Kiraitu said.

"Muturi is a good neighbor. When in Meru, he is home... Talk nicely to your villagers and they will vote for you because you are with them every now and then."

Kiraitu castigated leaders who insult President Uhuru Kenyatta, referring to him as a lame duck President, adding that Uhuru’s tenure will end in 10 months and between now and then, the political scence can change.

“He is the President and I believe in his leadership. Uhuru will be awarding a contract for construction of a dual carriage way running from Gikumene Primary School through Meru town to Meru national Polytechnic,” he said.

He neither supports Muturi for president, only backed him as Mt Kenya spokesman.
Counties
8 months ago

He took on the President for last year's purge of DP Ruto’s allies in Parliament
News
7 months ago
Eastern
26 September 2021 - 09:25