The ANC leader hit out at Deputy President William Ruto saying he was luring Kenyans with phrases and deceptive politics of none existing economic models instead of accounting for the Jubilee administration’s failures. 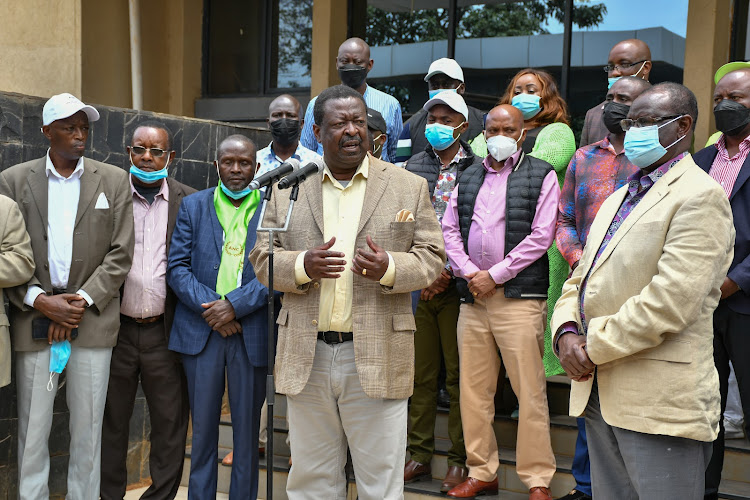 ANC leader Musalia Mudavadi on Saturday took his 2022 presidential campaigns to Meru region where he unveiled a 10-point agenda to turn around the economy.

Mudavadi said Kenyan economy was underperforming and promised to empower the common mwananchi to revive its growth through the 10-point economic blueprint.

He was speaking at Elsa Hotel in Meru town during a meeting with opinion leaders from the county under the invitation of Governor Kiraitu Murungi.

Mudavadi said he is the best person to succeed President Uhuru Kenyatta and revive the economy.

He cited the revival of economy when he was Finance minister in 1993 at a time the country was faced with several scandals and loss of public funds.

“There was shocking theft at Central Bank and we sought expert’s likes of Reuben and Cheserem allowing us to stop theft of Kenyan funds. When the National Bank was on its death bed, there would be domino effect as it was the third biggest bank in the country and it was to affect so many people, we brought life to it. Meru people are a great human resource,” Mudavadi said.

He lamented that some two million Kenyans were rendered jobless due to the effects of the Covid-19 pandemic. Another estimated two million people are no longer able to pay for their National Hospital Insurance Fund because of the economic hardships.

“I will seal corruption loopholes and create employment opportunities for our youth to reduce high taxes. There will be no upside-down priorities. I want to see tax regime where the capitation of teachers in schools matches the number of students," he said.

He added, "I am here to assure you that we can do it. Uchumi bora, pesa mfukoni. I ask Kenyans to scrutinise the agenda of presidential candidates to distinguish who is fit to lead and revive the economy. Foreign investors are shunning the country due to high licenses and taxation. We have failed. We want to revive the economy of miraa markets and bring value addition to miraa in the production of juice and yogurt.”

The ANC leader hit out at Deputy President William Ruto saying he was luring Kenyans with phrases and deceptive politics of none existing economic models instead of accounting for the Jubilee administration’s failures.

“If you are a cook and the soup you cook has a lot of salt, how can you claim you didn’t participate? You have been in government and couldn't bring solutions in the last 10 years, how will you do it? We must rectify the taxation regime. Many business people were doing container sharing but KRA bans this. We do not work for KRA but our families," Mudavadi said.

He however admitted that he has failed to keep the government on its toes saying the Opposition was crippled.

“It can be costly to be outside government but to entrench democracy, there must be people in the Opposition to hold the government to account. If the Opposition was working the way it is supposed to work, fuel prices could not have gone high as it is today,” Mudavadi said.

He also criticised the government over high-handedness, citing refusal to dialogue with education stakeholders over the Competency-Based Curriculum.

Mudavadi said some clauses that were contained in the Building Bridges Initiative do not need a referendum and can therefore be resolved through other means.

They likened the community to a beautiful lady ready for courtship "but will go into the bedroom with the finest presidential candidate who assures taking care of her interests.

None of the elected MPs from the region attended the meeting. Senator Mithika Linturi was equally absent.

Kiraitu praised Mudavadi for restoring the economy that was below zero when he served as minister during President Daniel Moi's regime.

The governor said politics was about interests and that that was his main reason for inviting all presidential aspirants to speak to the Meru people.

“I am engaging Musalia and other contenders because the days of food-loving Merus are gone and no one will define our own interests in some boardroom meeting," Kiraitu said.

He said he will be unveiling a party for Mt Kenya Eastin in three weeks time.

“We are mature and we decided where to go but can't do it without a vehicle. We are to have our own party to promote and fight for our own interests. It is about who gets what, when and where. What have you brought to Meru. Our interests are on roads, miraa markets, water, support for farmers to get resources and market, unemployment and more funds to our counties,” he said.

Kakamega Senator Cleophas Malala said if Ruto or Raila Odinga is elected president, then half of the country will not be happy.

“To avoid jailing threats from Raila and Ruto, elect Musalia. Not on his good looking but his agenda to revive the economy. Young men can't take their women to salon and many youths have Fuliza loans while many are on CRB,” Malala said.

Sabatia MP Afred Agoi said the Western region was banking on Mt Kenya to back Mudavadi so he can win next year's presidential contest, courtesy of the tyranny of numbers.