I suffered during my childhood, wore no underpants — Kalonzo

Wiper leader says he is no stranger to starvation, has been there and overcome it through God's grace

• The Wiper leader spoke during a burial ceremony in Kakutha village, Mitaboni, Machakos, on Tuesday.

• He exuded confidence that he will become the fifth president after emerging the winner in the 2022 election. 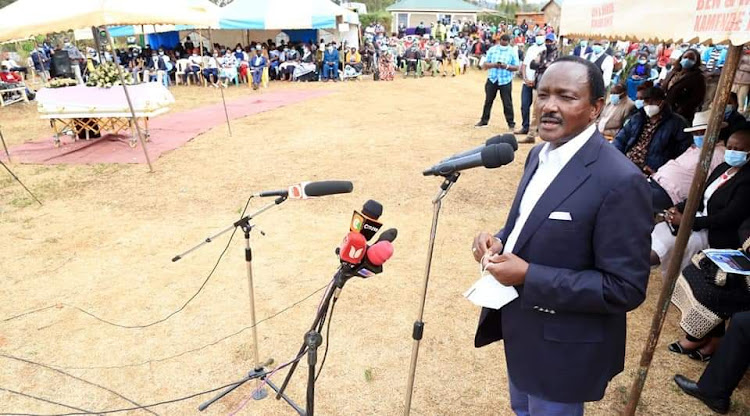 Wiper leader Kalonzo Musyoka has said he is the perfect 'hustler' because he went through a lot of challenges during his childhood.

Kalonzo on Tuesday attributed his leadership journey to God's grace, saying he came from a humble background. He narrated how he grew up at his parents’ rural home in Tseikuru village, Kitui county.

“If there is a positive hustler, it’s Kalonzo. I have seen all the troubles and overcome all the challenges,” Kalonzo said.

Kalonzo said he went through all troubles that poor children undergo.

“I slept hungry and my father bought my first trousers when he was working in Mombasa. I wore it without underpants and herded cattle,” Kalonzo said.

“So, somebody shouldn’t be cheated to call himself hustler. If there is a positive hustler, it is Kalonzo,” he added in a statement apparently directed at Deputy President William Ruto.

The Wiper leader told corrupt leaders that their days are numbered. He said Kenya has adequate funds that can spur rapid development if put to good use, but corrupt leaders dip their fingers into public coffers.

“Money in the country is much but ends up in corrupt leaders’ pockets. If you are involved in corruption and bribing Kenyans with proceeds of corruption, then your days are numbered. You will not only go home but also be jailed,” Kalonzo said.

He expressed confidence that he will become the fifth president after the 2022 election. He said he had taken good care of the Ukambani leadership mantle since it was passed to him by the late Mulu Mutisya.

“Leadership is protected and taken care of. Those who don’t protect leadership are like those who are coming to you with wheelbarrows, yet he has helicopters,” Kalonzo said.

“If you pressurise him more, he says it’s only that wheelbarrows don’t have engines, they could fly like helicopters.”

Kalonzo said One Kenya Alliance is the way to go, with him as its flag-bearer.

“OKA is the way to go to get Kenyans the next President. I’m not the one who wants to lead, Kamba’s are pushing me,” he said.

The Wiper leader said he was the one who gave former President Mwai Kibaki the free primary education idea.

Kalonzo said he will introduce free secondary education if he becomes president, hence relieve struggling parents of the fee burden.

He cautioned secondary school heads against sending children home for not clearing fees, citing the economic hardship due to the Covid-19 crisis.