KALRO TO THE RESCUE

Kalro says it is developing a new variety of maize that is resistant to stalk-borer, armyworm invasion and drought and that trials are in the last stages 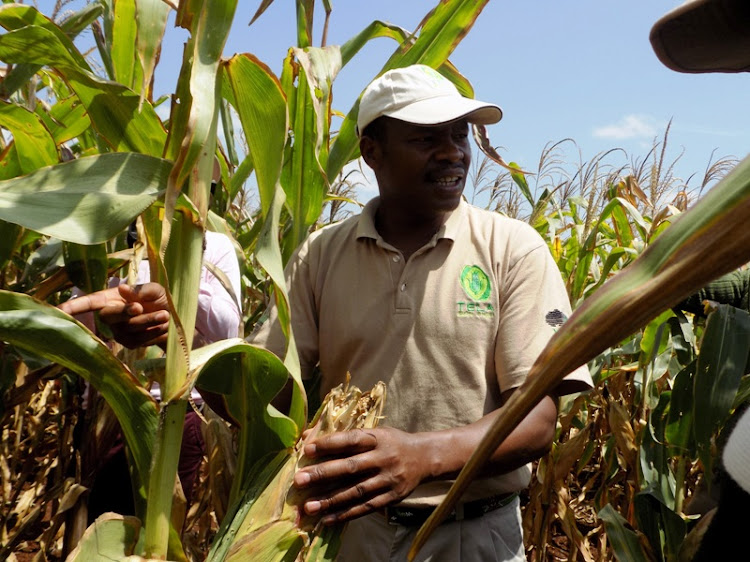 Maize farmers in Embu and Kirinyaga counties have resorted to the use of soap and tobacco to kill pests that have resisted pesticides.

They said stalk-borer and army worms have defied modern pest control mechanisms forcing them to resort to traditional methods.

They have also blamed unpredictable rains for poor harvests.

Speaking at the Kenya Agricultural and Livestock Research Organisation (Kalro) offices in Embu, the farmers said they have been trying most of the pesticides in the market to deal with the pests in vain.

"After several failed attempts, we are left with no option but to try tobacco mixtures and liquid soaps among other traditional methods," a farmer who did not want to be named said.

Kalro said it had developed a new variety of maize that is resistant to stalk-borer, army worm invasion and drought and that trials were in the last stage.

The farmers urged the government to hasten the distribution of the modified maize seed varieties once the trials are complete.

The trial of the variety which is being spearheaded by Kalro in partnership with Kenya Plant Health Inspectorate Service (Kephis) has so far shown a high level of success.

During a farmers training session at Kalro offices in Embu, researcher James Karanja said the new technology (Bt technology) involves the application of Bacillus Thuringiensis (Bt) bacteria which helps in the control of stalk borer in maize.

Karanja said the new technology has been in use around the world since 1997, although Kenya adopted it late in 2010. It only came to use in 2019 when Kalro started the trial of the new technology in maize. The trials are expected to be concluded in August this year.

Karanja said the trial started in the lab and then extended to a greenhouse before it was done on a confined field. "The results are very successful."

The scientists said the results were taken to Kephis who will conduct an independent national trial (National Performance Trial) on the new variety.

Once the trial is successful, it will be approved by National Biosafety Authority before farmers are allowed to use the variety during the short rains season in September and October.

The new technology is being used in varieties that are already in the market.

Karanja said it will boost food security and contribute to the Big Four agenda by reducing the loss caused by pests. Such losses account for about 20 million bags every year.

Apart from reducing the loss, Karanja said the high level of use of pesticides which have contributed to cancer-related illnesses will drastically reduce once the new technology comes into use.

The new technology has been approved in cotton (Bt cotton) and is currently being used in six counties including Kakamega, Kisumu, Embu, Kiambu, Kirinyaga and Busia.