Embu man arraigned for murder of wife and two children

Court orders that he be taken for mental examination before he can be charged.

• John Kariuki is said to have been on medication for mental illness.

• He allegedly murdered his 28-year-old wife and nine-year-old and five-year-old children on Sunday night in Kiamukuyu village, Mbeere South. 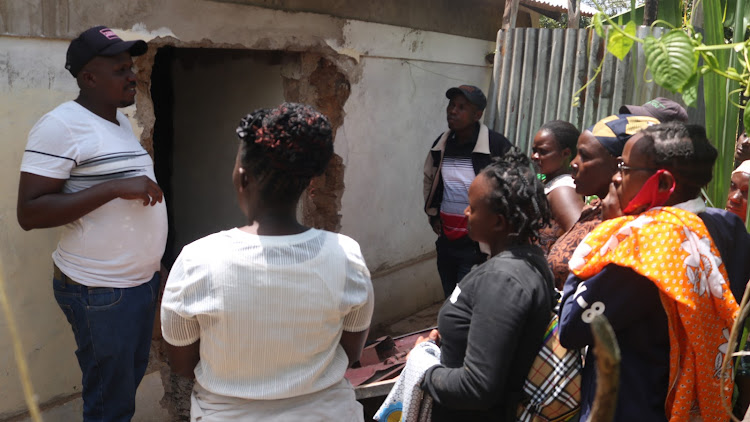 Residents in front of a house belonging to a suspect who murdered his wife and two children in Kiamukuyu village, Mbeeere South, on Sunday
Image: Reuben Githinji

An Embu man accused of killing his wife and two children with a hammer as his mother and other family members listened has been arraigned.

John Kariuki, said to have been on medication for mental illness, allegedly murdered his 28-year-old wife and nine-year-old and five-year-old children on Sunday night in Kiamukuyu village, Mbeere South.

He was presented before Siakago senior resident magistrate Edwin Wasike, but the police sought more time to complete investigations into the ghastly incident and have his mental status examined before he is charged with murder.

The magistrate granted the prayers and ordered that Kariuki be taken to hospital for mental examination. He will be returned to court on February 19 to take a plea.

Kariuki's sister, Jane Muthoni, recalled that on the fateful night, she went to her brother’s house accompanied by her mother and family members having noticed that he had serious discomfort. She said he refused to open the door for them.

And as they pleaded with him, they heard commotions inside the house during which she peeped through the window and saw her sister-in-law seated, with her forehead bleeding profusely. She also heard the suspect’s firstborn plead with him but he struck her head with the hammer, killing her on the spot.

Muthoni said that when they realised the situation was dire, they screamed for help from neighbours before the police were called. By the time the police arrived and broke the door, Kariuki had exterminated his family.

The officers arrested Kariuki and took him to Kiritiri police station and the bodies of the deceased were taken to Embu Level 5 Teaching and Referral Hospital mortuary.