There's no government without me - Ruto

• Ruto says Raila, the Riddle Man, has always remained out in the cold and does not know what  forming a government involves.

• He says the Big Four on Housing would have provided four million jobs, but it's dead and replaced by BBI with a few jobs for a few rich people. 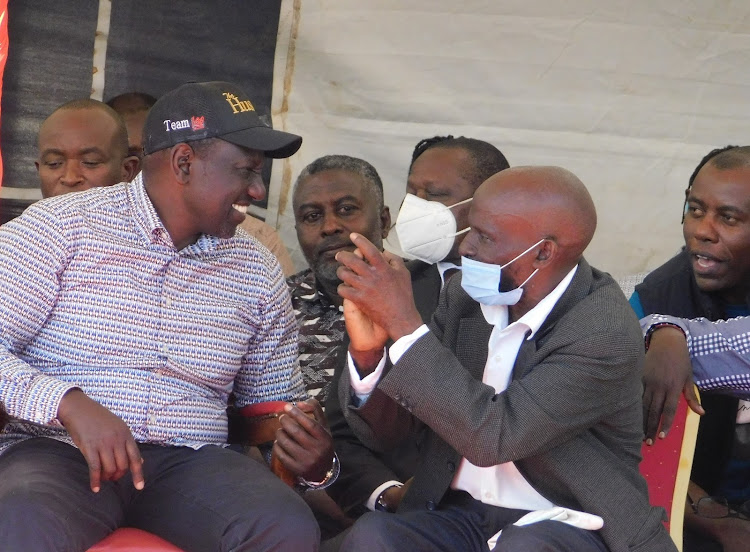 Deputy President William Ruto has said no amount of intimidation, teargassing or force meted out to his supporters will stop him from winning the presidency in 2022.

Ruto said in Meru on Saturday that he will form the next government.

He attended a fundraiser at Uruu Stadium in Tigania West after opening Tiirra Secondary School and attending a Maua Pastor's Fellowship in Igembe South.

He had stopover rallies at Maua town, Kangeta in Igembe Central and Muriri in Tigania East. Ruto donated Sh3 million.

"Kenyan politics must change from focusing on becoming tribal warlords to transforming wananchi's lives," he said.

Ruto criticised some Jubilee and ODM leaders hiding behind the 'deep state', saying that as Deputy President he is aware of all systems of government.

"Has the Kitendawili (riddle) man ever formed any government? It is foolishness to say there is a deep state." ("Hio mambo ya deep state ni ujinga"). I and President Uhuru Kenyatta did all possible to form the Jubilee government. (Tulifanya Ukarabatii, tukawa na hii serikali). They want to fool you and make you poor to misuse you,” Ruto said.

He claimed his opponents are idealess and that's why they are using the police to disrupt the hustler movement at the grassroots.

The system you hear about operates like witchdoctors, they have a concoction, light some fires and when smoke brews, they give hope they're they final word. I'm confident I am confident we will change this nation.

“When you defeat them in ideas and brains, they turn to war. They have no idea on how to take this country forward. They are now using police. Why all these threats? Why excess force? Sell your policies to Kenyans.

They should stop threatening that they have the 'deep state'. The 'deep state' is for fools. How can there be a deep state that the deputy president is not aware of ?"

Ruto added, "The system you hear about operates like witchdoctors, they have a concoction, light some fires and when smoke brews, they give hope they are the final. I am confident we will change this nation. I know what I am saying,” Ruto said.

He said some leaders are not interested in changing the fortunes of Kenyans as they have selfish interests in sharing posts and not creating jobs.

Ruto said affordable housing, one of the Big Four, could create jobs for about four million Kenyans - but it has been replaced by the Building Bridges Initiative.

“When you undermine and replace housing, which could give masons, plumbers, carpenters and many others jobs, to hive off  champion for posts of only four people on top and who already have jobs, are your priorities right?

"There will be no creation of posts for few people but jobs for the common mwananchi. The Big Four is now dead. We must change the debate and discussions should should focus on how to transform this nation,” he said

Ruto said Kenyans should be weary of leaders who live in Nairobi rather than going to mashinani where "the rubber meets the road."

Ruto said the debate on who will be the Prime Minister and discussion about leaders sharing seats is for the big boys.

Ruto apologised for the violence in Murang'a two weeks ago when two people died.

“I apologise for what happened in a church. It is not right and it won’t happen again. I want to inform those in charge of security to know that places of worship are sacred,” he said.

Meru Senator Mithika Linturi said 2022 campaigns will feature the dynasties against the hustlers.

Kitui East MP Nimrod Mbai said the 'deep state' will be in shock and will never get a chance to steal votes.

Gatundu South MP Moses Kuria said Mt Kenya will back DP Ruto man to man in 2022 without the endorsements of some people.

“We are sure President Kenyatta will not endorse Raila. Mt Kenya is behind Ruto,” he said.

Malindi MP Aisha Jumwa and Tharaka Nithi Woman Representative Beatrice Nkatha said nothing will stop the hustler movement and BBI will not see the light.

Jumwa said those against Ruto’s initiatives to empower hustlers are the enemies of development.

Buuri MP Mugambi Rindikiri said Meru people are taken for granted after elections, adding they will not be misled to vote blindly in 2022.

Kikuyu MP Kimani Ichung’wah Kenyans will not be slaves of a few popular and tribal people who want to remain in power.

“Let them use the BBI money to pay school fees. We have declared to walk the hustler’s talk. They use tribal divisions to cling to power. They won’t enslave you to remain in power,” he said.