The medics want the Public Service Board to pay July and August salaries before they can resume work.

• Outpatient services were disrupted and patients in wards left unattended.

• No services were offered in the laboratories, pharmacies and in the morgues. 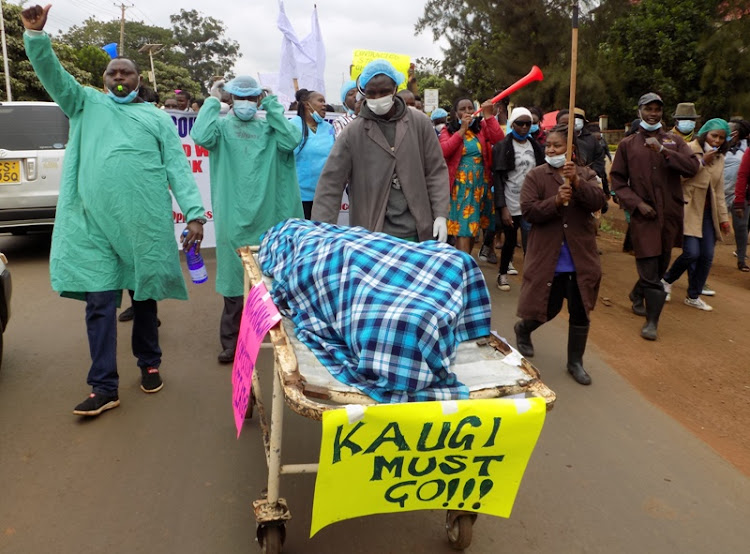 Embu residents were unable to get services in all public hospitals on Wednesday after health workers boycotted work to demand salary arrears.

Outpatient services were disrupted and patients in wards left unattended. No services were offered in the laboratories, pharmacies and in the morgues.

The workers from all cadres want the Public Service Board to pay July and August salaries before they can resume work.

They say the PSB has not paid Covid-19 special allowances and failed to harmonise salaries of workers on contract as well as remit last year's statutory deductions.

Unionist Dennis Mugambi said they issued a notice to the administration but it had adamantly refused heed to their cries.

The workers condemned county secretary Johnson Nyaga for failing to meet and discuss the issue with them. They said they will not resume duties until their demands are met.

Patients who went to the hospitals seeking services were stranded and returned home. Relatives of patients in wards had to look for private hospitals.

Eustace Nyaga, whose nephew had been in hospital for two weeks after being bitten by a cobra in Mbeere, said they would look for another facility.

Mercy Mbae who had bought her son for treatment went back with him.

They called on the workers and the county government to agree on how to end the strike.

Post a comment
WATCH: The latest videos from the Star
by REUBEN GITHINJI Corespondent, Embu
Eastern
10 September 2020 - 23:00
Read The E-Paper