Other counties at risk are Baringo, Turkana, Laikipia, Marakwet and Isiolo. 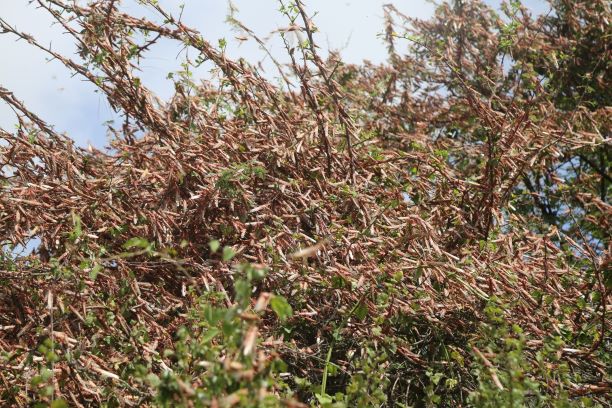 Eight counties among them Mandera, Wajir and Marsabit have the highest risk of desert locust invasion based on suitable climate and vegetation.

According to IGAD Climate Prediction and Application Centre (ICPAC), other counties at risk are Baringo, Turkana, Laikipia, Marakwet and Isiolo.

ICPAC's mission is to foster, through a whole set of programs, sub-regional and national capacity for climate information, prediction products and services, early warning and related applications.

The agency said the risk of invasion to crop areas is still high due to winds movement in Ethiopia, Eritrea and Sudan.

Rainfall is in higher than normal amounts in most crop areas in the southern and equatorial part of the region and plants are in vegetative stages.

Pastoral regions are currently still most impacted by the locust invasion although due to high rainfall amounts degraded biomass has recovered.

It, however, said locust swarms are declining due to the combined effect of intensified control and unfavourable climatic conditions in many parts of the region.

Most invasion areas are declining and in the next few weeks the locusts are expected to move to normal recession areas.

“Swarms are still widespread in parts of Oromia, SNNP and Afar regions in Ethiopia, Samburu, Marsabit, Turkana and Laikipia parts of Kenya,” the report said.

It recommends continued surveillance, monitoring and control in order to avert the likely negative impacts of the upsurge.

The United Nations has reported gains in the fight against desert locusts in East Africa and Yemen but says the threat of a food security crisis remains.

A progress report released on Monday last week by the Food and Agriculture Organisation showed that while the long heavy rains may favour reproduction, the second wave of locusts is expected during the upcoming harvest.

FAO director-general Qu Dongyu said in a statement that significant gains had been made in the fight against the desert locust upsurge.

He stressed, however, that more needed to be done to prevent a food security crisis, as the ongoing rainy season not only provides livelihoods for farmers and pastoralists but also favourable conditions for locusts to breed.

He said the UN agency working together with governments continued with surveillance and control operations despite constraints resulting from Covid-19 and other challenges.

"Our gains have been significant, but the battle is long and is not yet over. More people are at risk of losing their livelihoods and worsening food security in the coming months," Dongyu said.

Battle on desert locust is long and not yet over despite gains, says FAO boss
News
2 years ago

Widespread rainfall expected to produce a dramatic increase in their numbers.
News
2 years ago
Post a comment
WATCH: The latest videos from the Star
by GILBERT KOECH News Reporter
Eastern
18 May 2020 - 22:00
Read The E-Paper