Vastness of the areas they are dealing with has become a hindrance to efforts.

• The counties where the pests are heavily concentrated are Isiolo, Marsabit, Turkana, Samburu and some locations of Laikipia.

• The government and other organisations under the strategy employed to contain the locusts has mobilised Sh2.4 billion. 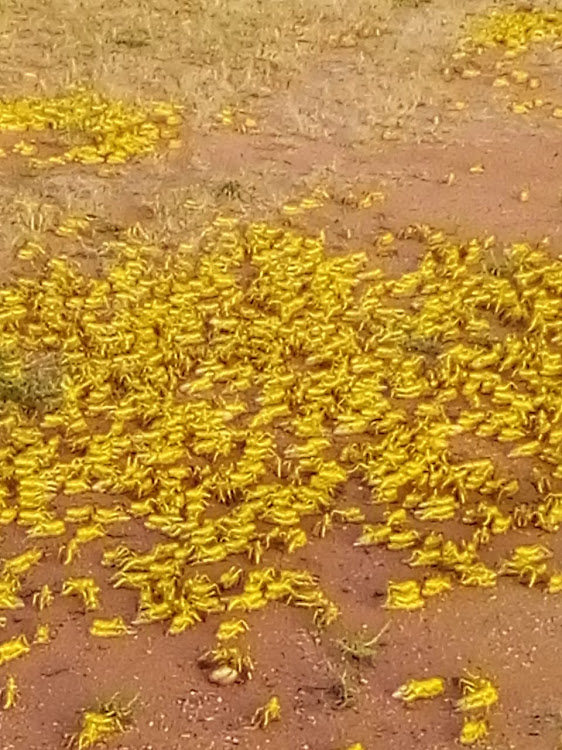 Mature desert locusts in Samburu county. They are yellow and can lay eggs.
Image: Courtesy

Rough terrain in Northeastern has frustrated efforts to control desert locusts, the Food and Agriculture Organisation in Kenya has said.

Williams Hamisi, assistant country representative and head of programmes in Kenya, said the vastness of the areas they are dealing with has become a challenge.

"We are dealing with rugged terrain, forests, deserts and some of these places are conservancies. The locusts are there but you don't obviously find them," Hamisi said.

"This calls for intensified surveillance so that we ensure nothing remains in the bush,” he added.

He spoke last week during a media tour of the desert locusts control process in Isiolo and Samburu counties.

The counties where the pests are heavily concentrated are Isiolo, Marsabit, Turkana, Samburu and some locations of Laikipia.

Albert Lemasulani, a resident and community leader in Isiolo, said the locusts have destroyed vegetation in the area.

He added that the eggs they are hatching are affecting their livestock, with some dying. Pastoralists are forced to move.

“The pests have also eaten our crops such as onions, kales, maize and beans and residents have to walk for long distances in search of food. This migration may bring conflict among the communities in the ASALs areas,” he said.

Tiampati Leleti, a resident and village leader in Samburu county, also said their livestock has been affected by the hatched eggs.

“Our livestock is suffering as the locusts have eaten the vegetation. Equally, they have hatched eggs which when our livestock feed on as they graze, they suffer from retarded growth, others are dying," Lelei said.

He said he has lost 80 goats and five cows since March.

"We have informed the authorities but we haven’t been compensated. We fear that if the invasion continues, even human beings will suffer economically and socially,” Lelei added.

Hamisi said FAO, in partnership with the government, is working to increase surveillance capacity.

“From the observations in the last four days, we are thinking of adding more helicopters with even some sophisticated gadgets for surveillance and identifying the targets," Hamisi added.

He explained that it’s not just about spraying, but locusts have to be identified, marked and coordinates given.

"If you are not able to do that then, it will be a waste of time, chemicals and other resources. Surveillance is what will help us to win the war,” said Hamisi.

FAO has put in place a locust control centre at the Lewa Conservancy and an information centre is being set up at the Ministry of Agriculture in Kilimo House to convey data collected from the locust-infested areas.

Hamisi says all the ground teams have been trained to use the eLocust3M app.

Heath McRae, desert locust specialist in charge of the locust control centre in Lewa, says they have been using an e-locust system to collect data from the ground and convey it to the aerial spray team to know the exact areas to target.

“It's an easy app to use. One is required to go to the e-Locust3M platform, log in and provide information. Once you tap send, that info is picked at 51D in Lewa and the same information is picked at the information centre in Kilimo House,” McRae said.

Hamisi explained that the same information is conveyed in Rome where desert locusts matters are being managed.

“From there, we are able to generate a map that shows where the locusts were sighted, reported, the intensity, the size of the swarm and its stage. Once that is processed, the field teams will be able to identify which swarms are to be followed using a tracking tool," Hamisi said.

"Early every morning, the surveillance helicopter will go to the point, find it, mark it, and send the coordinates and this is immediately followed by treatment,” he explained.

Between January and February, he said, counties such as Garissa, Wajir and Mandera did not report regularly. Some people on the ground were recording the data in exercise books instead of using the app.

This, he said, meant the data was not received on time and the maps would show there were no swarms.

“We are building the capacity of the people to use this system. The only other challenge remaining in those areas is the erratic network, but we have been able to quickly update the app so that you can input the data even when you are offline,” the FAO official reported.

“But this will all depend on whether we get new invasions. This may not be the case because the winds have changed to pointing towards the north. When we look at the map, we see concentration around Isiolo, Marsabit, Turkana and Samburu,” Boga said.

The PS, however, noted that the swarms are reducing.

The government and other organisations under the strategy employed to contain the locusts have mobilised Sh2.4 billion.

“The money has been used mostly for buying chemicals and deploying staff on the ground. At the peak, there were about 10 planes, but they have been reduced to four.

"We are still spending because the exercise has not concluded but we have enough resources to sustain the fight for the next three months,” Boga said.

Isiolo Governor Mohamed Kuti confirmed that there has been some progress as the number of swarms has reduced, since they were first reported in December.

“ We are hoping to be able to eliminate the menace in the next one month,” he said.

Experts say a single female locust can lay 300 eggs which are hatched within 2 weeks.
News
2 years ago

Locust invasion: Early warning did not lead to action

National, regional and international agencies slept on the wheel.
Opinion
2 years ago

Virtually all the eggs have hatched and the pests are at nymph stage.
Counties
2 years ago
by AGATHA NGOTHO Science Writer
Eastern
04 May 2020 - 22:00