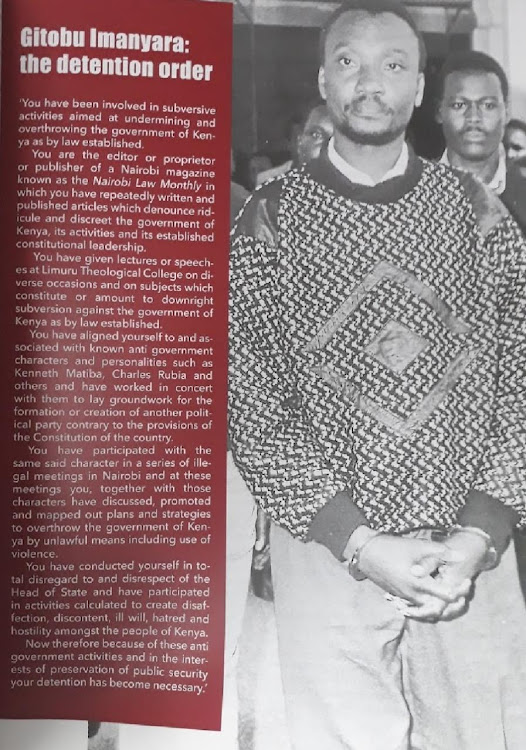 Former Moi detainee Gitobu Imanyara says no one can forget the violence experienced under the dictatorship.

Imanyara, a former MP is a lawyer and journalist, spent more than two years in prison because of his outspoken criticism of Moi's iron-fisted rule.

He was publisher and editor of the original Nairobi Law Monthly magazine and a foremost human rights lawyer and political activist.

He says Moi's legacy was one of forced disappearances, unexplained deaths, detention without trial and repression of freedom of expression.

“We close an eventful chapter. This chapter of history of Kenya will be remembered as one of the darkest in the never ending struggle to plant a functional democracy for ourselves," Imanyara said.

"There will be some pages worthy of note, like Moi’s reluctant recognition of presidential term limits, when he accepted the inevitably of multiparty politics and in the process averted the further shedding of blood, and his peaceful and gracious exit when Kanu lost.”

The former Central Imenti MP said there was limited media freedom and the politics of personality was exemplified in the naming of major national institutions after Moi.

“For all these dark periods of our history, we shall remember Moi for the lessons we have learnt. That there cannot be greater assurance for political stability than the rule of law based on respect for the Constitution,” Imanyara said.

He recalled that in the Moi years, chiefs were immensely powerful and ruthless. The courts were intimidated. Everyone had to toe the line under the single-party rule.

But Igembe South MP John Paul Mwirigi praised the former president's leadership. “Moi was a charismatic leader and a patriot whose rallying call was nationalism and peaceful coexistent. This should bring us all together as a nation to reflect on the deeper meaning of the words peace, love and unity as we forge ahead for a better Kenya,” he said.

Igembe North MP Maoka Maore hailed Moi and condoled with the family following his death on Tuesday. “You helped us to open Igembe North to the world through tarmacking of Maili Tatu- Laare road,” he said.

Gerald Murira, a former Voice of Kenya (now KBC) radio journalist, said Moi was given first priority in the news.

Murira said since 1978 when Moi took the presidency to December 30, 2002 when he left, there was no violence and Kenya was peaceful.

But politically instigated ethnic clashes hit the country leaving many people dead and maimed and thousands of internally displaced persons, especially prior to the 1992 and 1997 elections.

Murira said Moi created the Nyayo slogan used to welcome him to gatherings. "He could sometimes walk without his motorcade and with few bodyguards. He loved to socialize with people and promoted education. He introduced milk to all schools and many schools were issued with free buses," Murira said.

Former Kanu youth chairlady Margret Domisiano recalled how they wore red uniforms. He promised us at Kinoru stadium to buy us land. Kabere M’Mbijiwe and Angaine Jackson and Kiraitu Murungi were present.

“My condolences to the Moi family. I ask Knu youths who have been loyal since the 1970s to be considered. We used to be transported by Nyayo busses for free to Moi's functions. We have never benefited,” she said.