• Some residents say the project is environmentally destructive, accuse Nema of not carrying out an assessment or issuing the licence.

• The respondents argue that the state stands to lose by delaying the project "as a loan has already been procured". 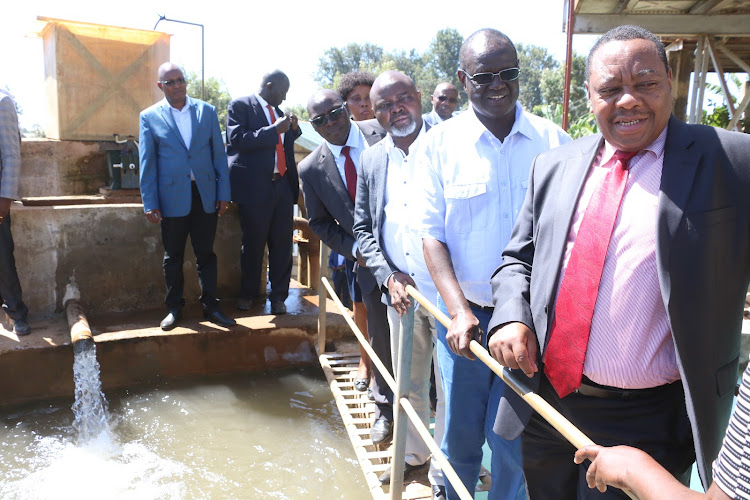 The National Environment Tribunal will hear the suit by a Meru self-help group seeking to block construction of a Sh1 billion sewerage treatment plant.

The suit was filed in April by Rwanyange Residents Self-Help Group on behalf of 1,000 members opposed to the upgrading of the plant in North Imenti.

They argue it will cause environmental damage and water pollution and say there was no public participation. They say the license was improperly issued.

Justice Lucy Mbugua of the Meru Land and Environment Court transferred the case to the Muhamed Balala-led quasi-judicial body.

Forty acres at Rwanyange were obtained by the Tana Board for the sewer project.

The board, with the approval of the state, had secured a Sh874.5 million loan from the African Development Bank for the project.

The complainants say the  Tana Water Board and the county government were undertaking an environmentally destructive project without a licence from the National Environment and Management Authority.

“Contamination of water sources was a technical matter best challenged under the Environment Management and Coordination Act. The nature of the project requires deep scrutiny of the completeness of the scientific study for which the Nema licence was issued,” Justice Mbugua ruled.

The residents had questioned the legality of the Environmental Impact Licence issued by Nema. In July, they convinced the court that the licence had not been issued and that the environment authority was not involved, leading the court to halt the works.

It suspended the project until the respondents produced the licence.

The respondents wanted the court to dismiss the suit, arguing that during the rainy seasons, stormwater infiltrates the system which causes the ponds to overflow on the main road and outside the plant, posing a danger to public health.

“The state risks incurring more expenditure by delaying the project in breach of the agreement with the Uhuru Kenyatta-led administration of securing a loan for the project,” their application read.

But the petitioners said it was issued contrary to the Environmental Management and Coordination Act (EMCA).

“The construction of the project will result in contamination of the Kinyaritha River and a swamp which are important for farmers, hence, the more than 10,000 residents in the location will be exposed to diseases. Nema did not carry out public participation before the project was initiated,” the residents argued in court.

The project involves the construction of sewerage convergence facilities, a wastewater treatment plant, an office block with laboratories and staff houses.

The residents said they are large-scale farmers of French beans among other food and cash crops.

They said farmers' cooperatives provide a market for their French beans and have threatened to withdraw their market should the project be put up on the water catchments "as it would affect the quality of the produce".

Through Tana Water Services Board technical services manager John Mbogori, the respondents said the plant is beneficial to the public — including the applicants —adding that its design meets international standards.

Mbogori said the project conforms to sustainable development goal number 6 of the UNDevelopment Programme on access to water and sanitation for all.

“The existing plant operates at three times its capacity, making it perform below its optimal design. Therefore, the treated effluent does not achieve its required biological and chemical guidelines for discharge into the environment," he said.

About 7.5 per cent of more than 100,000 residents of Meru town and environs are connected to Gakoromone sewerage system that was last upgraded in 1974.