Nema directed KPC not to cover trenches dug during clean-up

• A farmer claimed to have encountered oil products while digging a well in his farm.

• When the Star visited, a KPC oil tanker was being loaded with water from one of the new trenches with visible traces of oil products confirmed by oil smell. 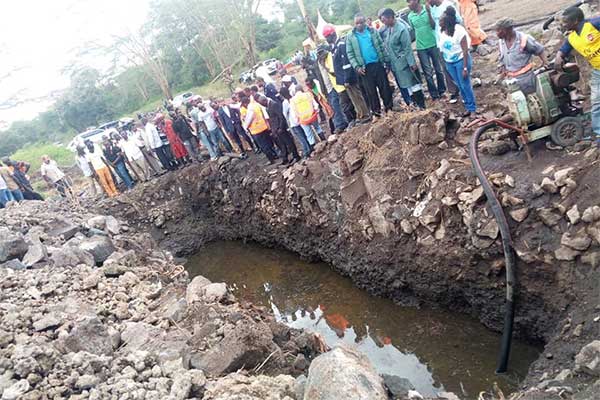 OIL TRACES: A crowd gathers around an inspection trench sunk by Kenya Pipeline Company to check the spread of oil following a leak.
Image: FILE

Two years after the Kenya Pipeline Company decommissioned cleaning equipment from the Thange River basin contaminated by an oil spill, the environment is yet to be fully restored.

The oil spill, which occurred in 2015 when a pipe burst, contaminated the soil and water bodies including River Thange relied on by Kibwezi residents.

The National Environment Management Authority had stopped KPC from covering or filling in trenches dug during the clean-up until the area is fully restored.

The case against KPC filed at the Environment and Land court in Makueni by Musembi Ndolo and Co Advocates will be heard on December 3.

Speaking to the Star on Wednesday, Makueni Nema boss Patricia Wambua said a farmer whose land lies in the concentrated area of the spill claimed to have encountered oil while digging a well.

“We have said they should not cover the trenches and the clean-up should continue until the site is fully restored. The Water Resources Authority has also informed my office that they had issued an order to KPC not to cover the trenches,” Wambua said.

She said the polluters, KPC, should continue with the clean-up until the environment is fully restored.

When the Star visited the site on Wednesday, a KPC oil tanker was being loaded with water from one of the new trenches with visible traces of oil that could also be smelled.

Resident Lupus Mulatya, whose land was most affected as it lies in the concentrated area of the leakage, said his mango trees have dried up.

“I have completely lost everything around here,” the father of 11 said. He claimed three of his children have stopped going to school as has no money to pay fees.

Mulatya said KPC uprooted some of his mango trees in a cover-up.

The 1,300 members of the Thange community have also accused KPC of failing to effectively clean up underground oil products. They said KPC lacks commitment and skill to undertake the clean-up, further exposing them to danger and loss of property.

Post a comment
WATCH: The latest videos from the Star
by MUTUA KAMETI Correspondent, Makueni
Eastern
29 November 2019 - 22:00
Read The E-Paper