• Kiala said there was no guarantee that Kalonzo will oversee free and fair party primaries. 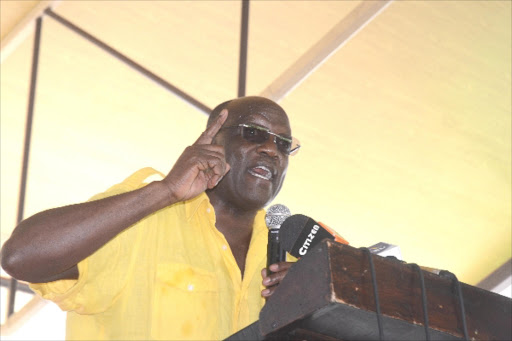 A section of politicians from Machakos county now want former Machakos Senator, Johnstone Muthama to end his commitment to Wiper party and find his own political path come 2022 general election.

Kiala said there was no guarantee that Kalonzo will oversee free and fair party primaries considering past events which led to the fallout of the aspirants during the 2017 general election.

“After a careful observation and calculation, I have realized that who support Muthama are the ones being targeted for ‘destruction’ by the Wiper party leadership. It is my understanding of politics that such ‘destruction’ is being planned to pave way for the eventual frustration of Muthama, which we will not allow,” Kiala said.

His thoughts were seconded by party leader of People’s Trust Party (PTP) Peter Mathuki who said Wiper had performed poorly in its management of internal affairs.

“Wiper party messed up big time during nominations for 2017 general elections and we are watching them even now. We have heard rumors that Muthama will be vying for the Machakos gubernatorial seat and we want him to be confident because we will rally behind him,” Mathuki said .

In addition, MCA of Kola Ward, Festus Ndeto said Muthama should seek an alternative political vehicle in his quest to become the next governor of Machakos.

“We are telling you for a fact that you should find an option early enough because the (Wiper) ticket will never be handed to you. From our honest observation, we can predict you will not be the preferred candidate for Wiper in the gubernatorial race,” he said.

Muthama dismissed their sentiments claiming that the reason he didn't support his senatorial seat was due to irregularities found in the nomination exercise as confirmed by the party under close watch of the wiper leader Kalonzo Musyoka.

However, Muthama tactfully avoided the debate when he rose to speak and vowed he will fight for his space within Wiper where he confirmed that he will support Wiper Leader Kalonzo Musyoka for presidency saying he stands a better chance.

The leaders were speaking during a burial of former nominated MCA Anne Wairimu in Matungulu on Saturday.

Post a comment
WATCH: The latest videos from the Star
by PHILOMENA KILONZO
Eastern
13 October 2019 - 15:40
Read The E-Paper