Politician Mathenge accuses some MPs were being against the visit

• Edwin Kiongozi and Zablon Mathenge, a Senate seat aspirant in 2017, said infighting by a section of Meru leaders has denied residents development.

• Kirinyaga Woman Representative Purity Ngirici set the record straight. She said Mathenge invited her and DP Ruto as chief guest for the fundraising. 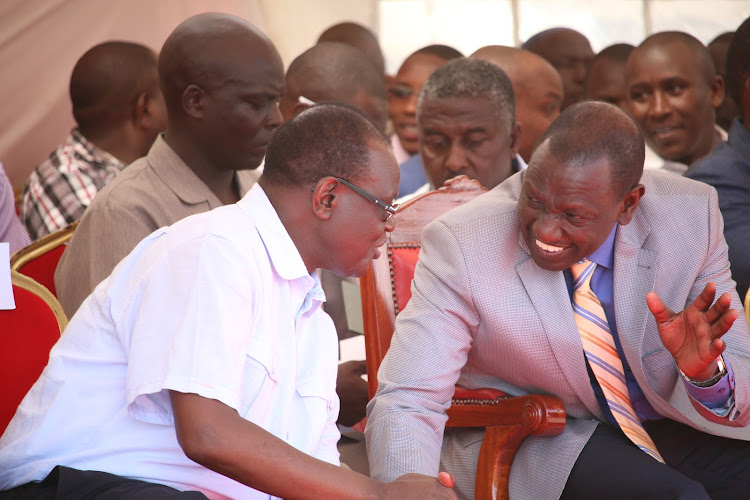 Two Meru MPs and politicians clashed on Sunday over who should take credit for  Deputy President William Ruto's visit in the County.

Edwin Kiongozi and Zablon Mathenge, a Senate seat aspirant in 2017, said infighting by a section of Meru leaders has denied residents development.

I want to tell the EAPC congregation that I am saddened by some people who claim to be leaders here and are alleging I blocked the DP from visiting Meru. He is a Deputy President for this nation and no individual can block him from visiting any part of the country," Dawood said.

"Understand that I and MP Halima Mucheke ensured the function is in DP’s diary. We talked to Ruto and he agreed to attend. So, it is me who ensured the visit was a success. Those claiming to have invited him should stop dreaming."

"I thank Mathenge for informing me about this function. Some leaders were against the DP attending this fundraising. I prayed and asked God to help me convince Ruto and he agreed to come," Aburi said

But Kirinyaga Woman Representative Purity Ngirici set the record straight. She said Mathenge invited her and DP Ruto as chief guest for the fundraising.

Ruto contributed Sh1 million and another Sh1 million he said was from President Uhuru Kenyatta.

On Saturday, Kiongozi and Mathenge accused some MPs of blocking the DP Ruto from meeting Meru residents.

Mathenge said some MPs have been against Ruto’s visit.

“They had even called him not to attend our Church fundraising. But to their surprise, DP Ruto confirmed that he would attend,” Mathenge, the owner of a local based TV and a dadio station, told journalists at Meru town.

“I ask Meru leaders to stop fighting each other and unite. Why do they fight such developments? Let them work as team and allow the DP, who has not visited the county this year to help as much he can,” Mathenge said.

Kiongozi had said some leaders want to show off or boast about bringing the DP to the county.

“Let our leaders use that courage and energy in fighting cancer. Anyone can request the DP to to assist in development . The DP should work closely with both elected, church and other community leaders. Why is he made to believe we are conmen? We are not. As the Meru community we want peace. We want our leaders to unite,” Kiongozi said.