• The traders were against the arrest of some of their colleagues 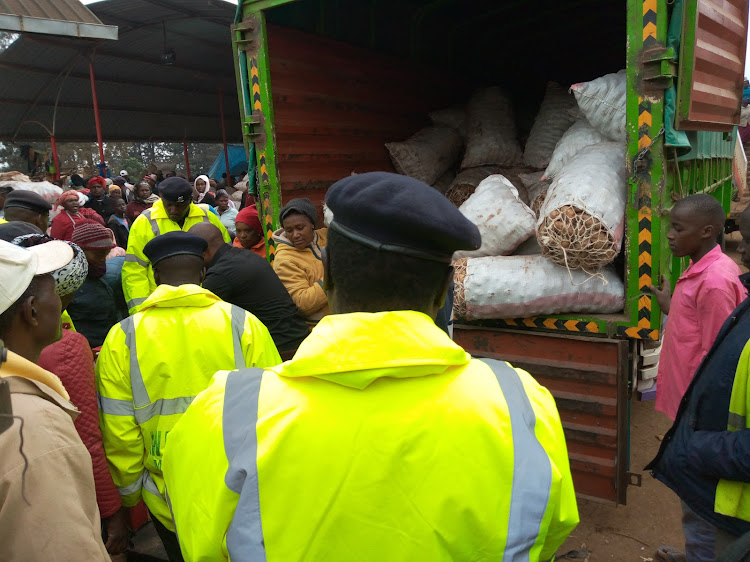 There was a commotion in Meru town after potato traders clashed with police over new regulations.

Police on Thursday threw teargas canisters at traders at Gakoromone market traders during a crackdown on vehicles ferrying more than 50kg, which is the new limit.

The traders were against the arrest of some of their colleagues who had not complied with regulations being implemented by counties with the help of the national government.

A wheelbarrow puller who was suspected to have loaded the produce in excess of 50kg was arrested.

In Meru, the county’s Trade Ministry is set to overcome several hindrances that had led to failure in implementation of the national government’s potato regulations Gazette notice dated April 5, 2019.

The regulations are based on the 2013 Potato Act in past years which included not involving potato cooperatives associations/unions, Agriculture Council of Kenya, ODPP, Media, MCAs, police and traders.

Agriculture Council of Kenya chairman Charles Mbuthia convened a stakeholders meeting in Meru town where they agreed to start a thorough crackdown on traders, farmers and anyone who defaults the regulations of selling potatoes by kilograms units.

Timau MCA Collabo Marete, who represents a big percentage where the crop is grown, said they will work to ensure every stakeholder complies.

“We have seen some traders flouting this law, but let them know there is no turning back. Farmers have suffered the most when their potatoes packaged in Mituuru,” Marete said.

Kisima MCA Joy Karambu said business people should comply to save themselves from penalties.

“We have engaged policy implementers unlike during the last regime where it did not succeed. It is across the whole country and I'm happy this will improve lives,” Karambu said.

Trade and cooperatives executive Maingi Mugambi said the crackdown will not leave out those given free potatoes whether from farmers or relatives unless they adhere to kilograms’ package.

“We warn everyone, even if you are given potatoes for free and they exceed 50Kgs, repackage them into 40kg by 30kg to avoid arrests,” he said.

Maingi said the maximum per bag package is 50kgs and anyone contravening the law will be liable to a fine not more than Sh5 million or a sentence not exceeding three years or both.

Transporters will also be required to acquire licences and the regulations are meant to benefit everybody involved in the potato value chain.

“It is to help farmers, county, business people and handlers. When you consider much expenses a farmer incurs buying fertilizer, spray chemicals, all are sold in kilograms or liters. Crisps are sold in grams but when it comes to selling by farmer potato package weight exceeds even 100kgs, it is not even known. We are not to dictate the prices, the market, traders and handlers sets the prices,” Maingi said.

Potato is the second most important staple crop after maize in the country.

Meru produces more than 170,000 tons of potatoes and there are about 30, 000 farmers planting potatoes in the County.

Kenya’s potato industry has an annual turnover of Sh46 billion and supports livelihoods of over three million farmers.

The national government through the ministry of Agriculture has been expanding production capacity of both KALRO and ADC laboratories, increasing the land under irrigation for potato production and sensitizing farmers to scale-up the use of certified potato seeds.

The hospitality industry and households make potato chips and crisps. Potatoes can be cooked with other foods as well.

She brokers will no longer be determiners of farmer’s crop prices which has been at throw away.

The Act is to curb unscrupulous traders who have been taking advantage of consumers when purchasing potatoes and packaging potatoes in containers that are craftily half empty hence the regulations are to protect the farmer and consumer transactions.

In 2017, the Kenya Plant Health Inspectorate Service (KEPHIS) and potato breeders introduced a total of 53 new varieties of Irish potatoes that were said to have met the required standards set by the international fast food joints.

According to International Potato Center, the crop is the third most important food crop in the world after rice and wheat in terms of human consumption. More than a billion people worldwide eat potato, and global total crop Production exceeds 374 million metric tons. There are more than 4,500 varieties of native potatoes, mostly found in the Andes. They come in many sizes and shapes. There are also between 100-180 wild potato species.

Meru potato farmers are set to benefit by increase of varieties, setting up of a value addition centre and protection from exploitation by ...
Counties
1 year ago
STAR COMMUNITY POLICY AND PARTICIPATION GUIDELINES
by GERALD MUTETHIA Correspondent, Meru
Eastern
10 August 2019 - 12:16