CHILDREN DROP OUT OF SCHOOL 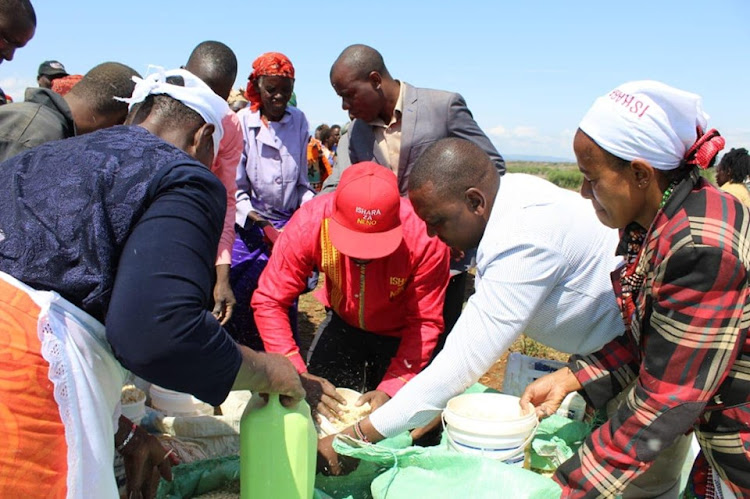 The Athwana MCA and a cleric are appealing for food aid to hunger-stricken Tigania West residents.

Ward rep Victor Karithi told journalists at Kandebene in his ward that about 40,000 residents from Tigania West alone are starving in arid and semi-arid areas.

He called on the national and county governments and well-wishers.

The MCA said the subcounty is suffering less than Tigania East and some parts of Igembe.

The Rev Nathan Kirimi of Jesus Winner urged governors, MPs, senators, MCAs and other officials to minimise foreign travel and instead utilise the money to feed starving citizens.

Kirimi said it is shameful for leaders to look down on their electorate when death faces citizens if there is no swift intervention.

He was asked by David Njati, a Meru FM reporter who has relatives at Kandebene, to intervene. Together with Karithi, the reverend donated bags of maize on Saturday.

Residents Jeremiah Mugambi and Jenifer Muiti said they depend on hope and prayers after rains failed for the last four and half years.

They said as faithful farmers, they plant but crops dry before maturity. they said their livestock is dying too.

Learners in Tigania Central have been dropping out of school too due to hunger.

Some pupils only attend in the morning.

Patrick Kiriinya, a parent and committee member of Gatithine Primary, told the Star that the worst-affected families are those with elderly relatives, people living with disability and small children.

The rivers they depend on are drying up.

Karithi, the Meru Assembly Majority leader, said the drought is worse in Mumui, Kandebene and several other areas. Pupils students worst-hit by the drought and dropping from school, Karithi said

He proposed a feeding programme be introduced before the end of the year. I am lobbying my colleague to urgently compel the county to allocate emergency funds for the crisis, he said.

"Roads and other developments are of no benefit when our people are to die. The drought is continuing to bite.”

“It is alarming to hear that for the last three years residents have not harvested due to failed rains," he said.