• Residents accuse the gangs of killings, rape and abduction of school girls.

• Githu, Amugaa and Ngutu locations are the worst affected with their chiefs and assistant chiefs now living in constant fear of being attacked by the criminals. 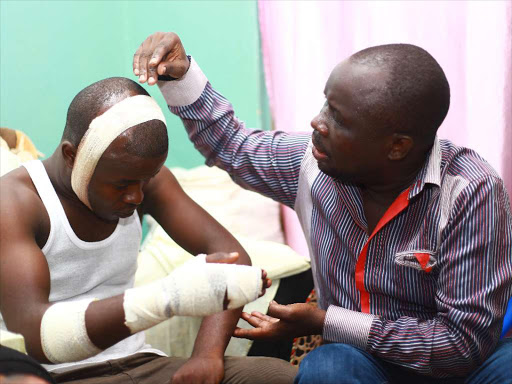 Rapid response officer Francis Auma attends to Clinton Shazima who was attacked by a gang on Saturday
Image: FILE

Tension has gripped Tigania in Meru County following the resurgence of a criminal gang that is killing and maiming residents in broad daylight.

Githu, Amugaa and Ngutu locations are the worst affected, with their chiefs and assistant chiefs now living in constant fear of being attacked by the criminals.

Limiru said the gangs are evicting landowners from their farms and harvesting their miraa.

“They (gangs) have been here for at least one year. They terrorize us and then run away to the neighbouring county forest and later resurface. They are now very active and we are living in fear,” senior chief Francis Ratanya of Githu location told the Star.

According to the administrators, the gang is operating under the name Ngorwe Taliban Power and its members are derived from Githu, Tiira, Ugoti, Kunati, Ngutu and Ankamia areas in the larger Tigania.

“Officers at Githu, Amugaa, Ankamia and Kunati Administration police posts are demoralised because they have been forced to watch as these criminals terrorize us,” a resident told the Star.

Cases of criminal gangs hacking residents to death have been on the rise in the various parts of the country. In Matungu constituency in Kakamega, dozens of residents have been killed by machete-wielding gangs.

Post a comment
WATCH: The latest videos from the Star
by JULIUS OTIENO Journalist, Political and Parliamentary Reporter
Eastern
13 May 2019 - 00:00
Read The E-Paper