Tharaka Nithi is ranked fifth nationally in use of contraceptives

•Priests, who are celibate, say there are few children attending church classes for baptism 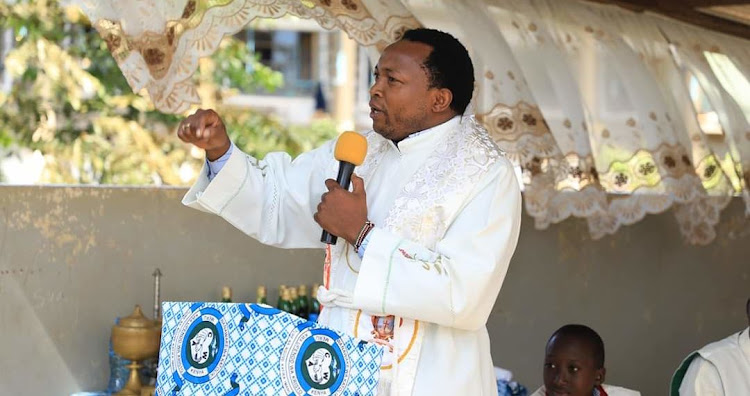 CELIBATE: Fr Gerald Mugendi of Iruma Parish is leading a campaign for families to reject contraceptives and have many children
Image: GERALD MUTETHIA

The Catholic Church in Tharaka Nithi has launched a campaign against the county's successful uptake of family planning services.

The church says it is worried by a dwindling number of children in catechism classes.

Tharaka Nithi has Kenya's fifth highest use of contraceptives.

At least 74 per cent of women in the county are on modern family planning methods, above the national average of 58 per cent, latest data from the United Nations Population Fund shows.

The campaign is likely to stoke controversy at a time Kenya is running one of Africa's most progressive family planning programmes.

“We have no children to teach catechism in our churches due to the low number of children in your families and we request mothers to continue giving birth,” said Fr Gerald Mugendi of Iruma Parish, who is leading the campaign.

He said the county would develop economically when the population is high.

However, research shows countries with high fertility typically face challenges in providing education for children, health care for all and employment opportunities for young workers.

“I want to assure the father and the church at large that in my capacity I will support this campaign in all ways possible in ensuring our women are giving birth and discourage them from using the contraceptives and all other methods of controlling birth,” Mbiuki said.

“We have been trying as men to impregnate our wives but there are no positive results we get from them prompting us to think we are the problem,” the MP said.

The governor also expressed his support towards the campaign by promising to equip all health centers in the county with maternity services.

“My humble request to our women is that you make use of these facilities now that the church has kicked off the campaign,” Njuki said.

He regretted that the county government has been forced to reduce the standard size of building classes due to the low number of children going to schools.

He said some classes have less than 15 children out of the 40-50 children needed  in a classroom.

With census slated for August this year, the governor urged the residents to ensure they give the correct details of their families by providing the exact number of their children and family status.

“Let us ensure that all our children are counted during the exercise and I urge you all if you have children living or working in other counties, ask them to be in the county during the exercise for them to be counted. This is due to the fact that the new formula of allocation of monies to the counties will be determined by the population of people in the counties and poverty index,” Governor Njuki said.

Bishop Mugambi thanked the Governor for the various development projects he has implemented in the county and urged the people of Tharaka Nithi to  support him.