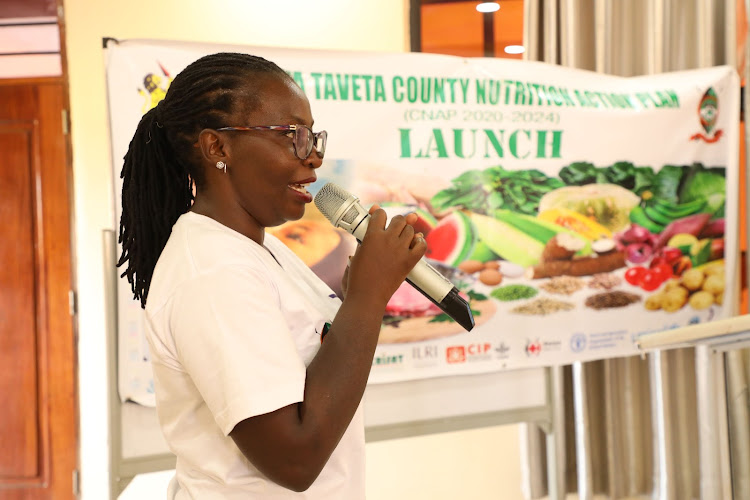 MALNUTRITION: Taita Taveta county nutritionist Pauline Mugo in a past event. She aid the county is relying on community health volunteers to identify and attend to cases of malnutrition.
Image: SOLOMON MUINGI

More than 23 per cent of children under five years in Taita Taveta county are malnourished and with stunted growth.

County nutritionist Pauline Mugo says child stunting rates have increased as a result of the prolonged drought. She warned that the numbers are expected to shoot up further following depressed rainfall recorded in the region during the October, November and December  season.

“Many people in this region depend on the OND short rains that have already failed. This has contributed to the food insecurity being recorded now,” Mugo said in an interview on Monday.

The officer said at least 7-10 cases of severe acute malnutrition are recorded every week in different health facilities across the county.

Further, more than 200 cases of severe acute malnutrition are reported every month in the county, which is an increase from 80 cases recorded in past months.

The officer added that this is mostly attributed to the continued decrease in milk production and consumption at household level, as well as poor dietary diversity, poor child feeding practices and reduced food intake at household level.

Only 52 per cent of children under five years are able to get the recommended feeding practice recording decrease from 90 per cent in the past months.

Additionally, above normal malnutrition rates were being reported for children under the age of five years and pregnant and lactating mothers.

More than 150,000 people in the county, among them, 17,000 children are facing starvation, according to the National Drought Management Authority. Some 76,000 men and 73,000 women are also in dire need of food assistance.

Mugo has now recommended an enhanced education of parents and caregivers in a bid to transform feeding practices, dietary adequacy and growth of children.

The county is relying on community health volunteers to identify and attend to cases of malnutrition.

The county has further been using the Positive Deviance Hearth Plus approach as a key factor to reduce the prevalence of malnutrition and rehabilitate malnourished children in the county.

“Malnutrition not only affects physical health but also mental health. If nothing is done, then the situation will affect the children’s performance in school,” she said.

Malnutrition in Kenya accounts for 35,000 deaths annually among children under the age of five, with three million deaths among children being recorded globally.

According to the Unicef, more than a quarter of children under the age of five, or two million children, have stunted growth in Kenya.

Over 150,000 residents from 30,050 households in the county are facing food insecurity.
Counties
2 weeks ago

It's part of interventions to overcome current food crisis caused by ongoing drought.
News
2 weeks ago

NDMA says the most affected counties are Marsabit, Mandera, Garissa, Baringo and Isiolo
Health
2 weeks ago
Post a comment
WATCH: The latest videos from the Star
by SOLOMON MUINGI
Coast
18 January 2023 - 21:00
Read The E-Paper