• Traders and business operators in the town have not been paying taxes since June 2020 owing to the protracted boundary row.

• The dispute has been blamed for derailed service delivery in the border town. 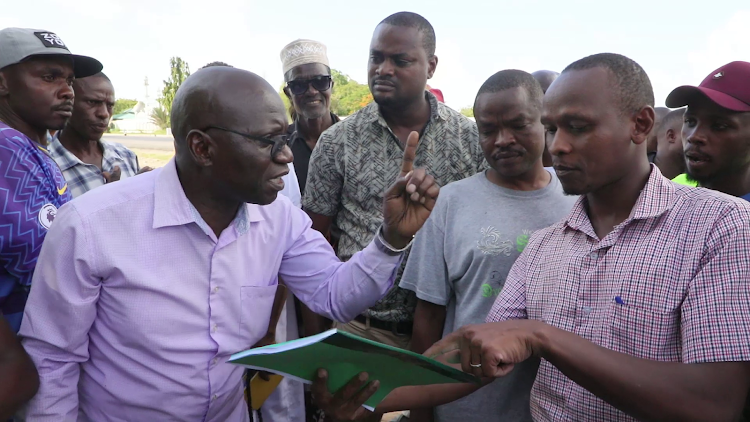 Taita Taveta county has formed a team to collect revenue in the disputed Mackinnon Road town to which neighbouring Kwale is also lays claim.

Taita Taveta chief officer for finance Leonard Lang’at on Monday led the 10-member team to the town to assess the situation before starting to collect tax.

He said the collection conforms with a court order that directed the two counties to deposit revenue collected in the border town in a joint account.

“We are here to plan on how we will issue traders with new licenses as per directive of the court that allowed us to carry on with tax collection in both Mackinnon and Mtito Andei towns,” Lang’at told the Star in an interview.

The Environment and Land Court in Mombasa on September 22 last year appointed Taita Taveta as the sole authority issuing business permits and levying taxes in the town.

It further directed that all the revenue collected be deposited into an interest-earning bank account opened jointly by the two county governments.

An attempt to meet with traders has, however, already been met with resistance as a section of traders on Monday turned hostile to the Taita Taveta official who had gone to the town to strategise on  issuing new business licenses.

Lang’at who was accompanied by Governor Andrew Mwadime’s economic adviser Thomas Njumwa and revenue director Simon Irina, a section of politicians and activists appeared determined to  disrupt levying of taxes.

“The hostility here is not just coming from traders alone. Some leaders and activists who don’t want the matter settled are secretly inciting them,” he said.

Former governors Salim Mvurya (Kwale) and Granton Samboja (Taita Taveta) in 2020 agreed to stop collection of taxes at the town so as to fast-track mediation talks.

It is not clear whether the mediation talks took place as the row still ranges.

Kwale county claims  its boundary with Taita Taveta is at Miasenyi; few Kilometers from Mackinnon Road town, while the latter says that its boundaries extend to Landi ya Mwembeni, near Taru town.

In 2015, former Taita Taveta County Assembly Speaker Meshack Maghanga and then Marungu MCA Paul Waweru were arrested after they attempted to erect a signboard to mark the boundary at Landi ya Mwembeni area in Taru, Kinango constituency. The area is considered to be deep within Kwale county.

Taita Taveta has not collected revenue in her border towns of Mtito Andei and Mackinnon since the inception of devolution due to the dispute with Makueni and Kwale counties. The dispute has been blamed for derailed service delivery in the border towns.

Former Taita Taveta Governor Mruttu on Sunday said the current boundary impasse can only be solved through the Senate.

“Constitutionally, such disputes can only be solved through the Senate which is mandated to form a committee of inquiry to look into the matter,” the Agriculture Finance Corporation board chairman said. He further advised political leaders to follow the law to settle the dispute.

Team from both sides came up with report detailing boundary at the Rombo Ranch.
Counties
2 years ago
Post a comment
WATCH: The latest videos from the Star
by SOLOMON MUINGI
Coast
17 January 2023 - 22:00
Read The E-Paper