Vivien says there is a need for East African countries to market tourism as a bloc.

• Vivien said their visit to Kenya was mainly to market, learn and work together as East Africa to promote tourism. 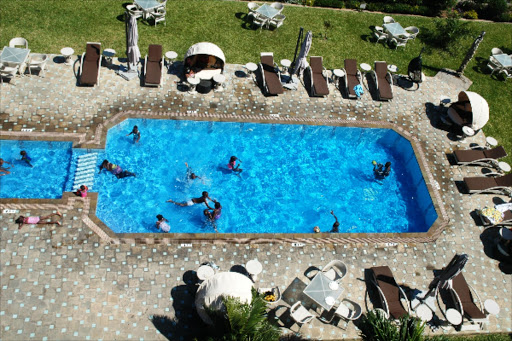 Tourists swimming at Best Western Plus Creekside Hotel in Mombasa with no foreign tourists around/
Image: FILE

The Ugandan government and Kenyan coastal counties are working towards promoting East Africa as a major tourism destination, Uganda Tourism Board director Lyazi Vivien has said.

He said there is a need for East African countries to market tourism as a bloc.

Vivien was speaking in Mombasa during a conference that brought together 500 delegates-100 from Uganda and 400 from Kenya.

He said there are a number of things the two countries are doing, including ensuring there is a single East African visa for those coming from the rest of the world.

“We have programmes that we are undertaking and we are improving the transportation system. We now have Uganda Airlines travelling to Mombasa. Kenya Airways has always been here for us so the transportation network has improved greatly,” Vivien said.

He said their visit to Kenya was mainly to market, learn and work together as East Africa to promote tourism.

The partners are also organising a trip to Uganda. Thirty people will travel from Kenya to Uganda next week to explore the tourism market in the neighbouring country.

“We know very well that when it comes to Uganda, Kenya is the biggest source of market because many Kenyans travel to Uganda for various reasons, especially tourism,” Vivien said.

“Conversely, Uganda is the third biggest source market for Kenya. We come especially to Mombasa for romantic escapades, weddings and other attractions.”

The director said during the Nyege Nyege festival that took place in September in Uganda, a good number of Kenyans attended.

Statistics show that about 10,000 Kenyans travelled to Uganda for the festival.

Vivien said more than 200 weddings of Ugandans are held in Mombasa.

“We are also promoting sports tourism as one of those regional things we are doing together,” he said.

Kenya Coast Tourism Association chairman Victor Shitaka said that after the conference they will visit Kilifi and Kwale counties.

He said there will be exchange programmes between Kenya and Uganda.

“We want to complement each other in tourism,” Shitaka said.

He said the partnership has started with Uganda but it will expand to other East African countries.

“We are looking forward to a 10 per cent increase in Ugandans coming to Kenya in the next six months,” he said.