Nassir has suspended construction of all building in Mombasa County. 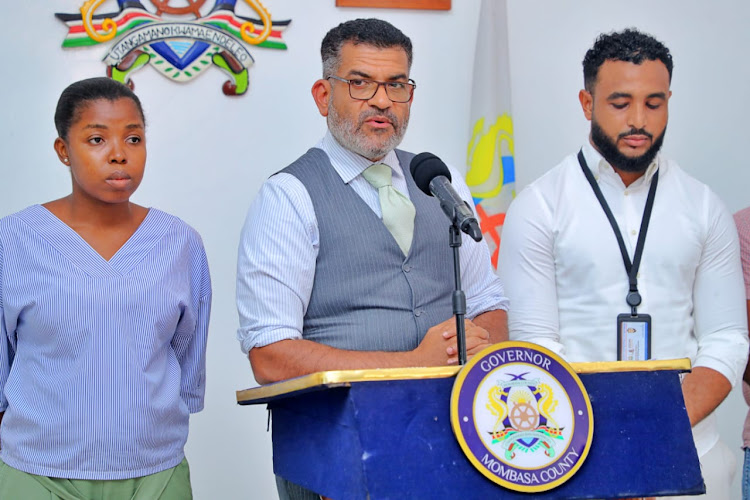 Mombasa Governor Abdulswamad Nassir on Thursday evening suspended the construction of all the buildings over irregular approval and non-compliance.

A preliminary report released by Nassir showed that 97 buildings, which were under construction in Mombasa County, had not been approved by the County Housing Department.

Following the revelation, Nassir stopped all constructions being undertaken in the six sub-counties of Mombasa; Kisauni, Nyali, Likoni, Mvita, Chagwmwe and Jomvu.

Nassir gave contractors and investors a seven-day ultimatum to resubmit their drawings and all the necessary documents for re-approval before construction works resume at their sites.

Addressing the media at his office, Nassir said that the preliminary report also showed that some 67 buildings that were under construction differed from the designs and plans that had been submitted to the county for approval.

“The most shocking thing is that we have three properties that were issued with stop orders, but are still going on illegally,” said Nassir.

The Governor asked the owners of the three properties that are located in Majengo King’orani, Old Town and in Likoni to present themselves within the county within the next seven days.

“Failure to which, the county government will seek orders for them to be arrested for endangering the lives of Mombasa people,” said Nassir.

He said the owner of the property in Old Town decided to add two floors on an already existing nine-storey structure, without the county’s approval.

The property in Likoni, Nassir said, had already been condemned in March this year after it partially collapsed.

“This must stop, we cannot be a county where people just build without plans,” Nassir said.

Nassir added that the county will revisit all the sites that were issued with stop orders to confirm if the orders were adhered to, failure to which tougher actions will be taken against the property owners.

All property developers have until Thursday next week to reapply for approval as ordered by the Governor.

“I will not be the one to keep silent, yet we know something is wrong. If you know you are constructing without a permit stop at your own cost and come apply for the permit,” said Nassir.

“We are going to come up with another swoop where anyone who will be found without a permit, a heftier penalty awaits you.”

In his third executive order, issued last month, Nassir commissioned a Taskforce to assess and audit compliance in the construction in Mombasa.

Nassir said that the intention was to ensure that all buildings in Mombasa are up to code and provide occupants with adequate infrastructure for water and sewerage.

On November 2, Nassir hosted The Board and Management of the National Construction Authority who paid him a courtesy call.

He promised that Mombasa County will work hand in hand with the NCA to effect the recommendations of the construction Taskforce to improve the standard of living in Mombasa while maintaining good order.

Post a comment
WATCH: The latest videos from the Star
by ONYANGO OCHIENG’
Coast
18 November 2022 - 00:06
Read The E-Paper