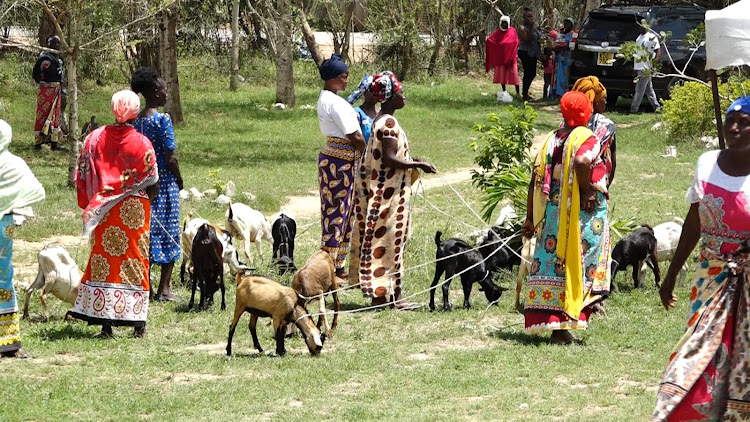 Some of the widows who received the 200 goats n Kilifi county.
Image: ALPHONCE GARI

Some 100 widows from the drought-stricken area of Mariakani, Kilifi county received 200 goats from an NGO to cushion them from poverty.

The widows, who had a huge burden of raising their children after their husbands died, received the animals from the Give a Goat Foundation of the USA.

The widows could not hide their joy while receiving the goats at Mariakani town on Saturday.

They were each given a male and female goat, which are expected to reproduce within a few months. The milk-producing goats will give them a source of income from milk sales.

Steve Dawn, the president of the Give a Goat Foundation, said the organisation intends to give some 20 million goats to 10 million widows countrywide.

According to Dawn, the goats can survive harsh climate conditions, therefore, they are ideal for the dry regions of Kilifi.

He said he is confident that the goats will multiply and transform the lives of the widows.

“When you have 100 goats in one place that is sacred ground. I’m privileged to be here to give hope by giving out goats. Our vision is to give out 20 million goats to 10 million widows in the next 20 years,” he said.

Dawn said the milk from the goat will also sustain the families with nutrition.

He advised the beneficiaries to give out the first goat that will be born to the widow next door.

Anne Musau, the chief project executive of the foundation and Financially Fit Company said they were happy to give hope to widows.

She said the goats came at a time when hope was needed more as many across the country are facing hunger.

"As you can see, rains have just come and these goats are going to be taken care of and within a short time the widows are going to be enjoying goat milk with children in their families," she said.

Kilifi Deputy governor Flora Chibule, who was the chief guest during the event, thanked the foundation for its efforts and assured the widows that the county would also support them through their groups

She said Kilifi is among the counties that have been highly affected by drought but they will make sure no one dies of hunger.

Martha Koki, the Mariakani MCA, who was brought up by a widow, said widows have been forgotten and face many challenges.

"I urge all organisations, whenever we try to empower the community, let’s not leave widows behind,” she said.

Selina Omar, a beneficiary of the Give a Goat Foundation, said the programme came at the right time, as she used to rear goats but sold them due to the famine.

Omar said she will do her best to ensure the goats survive and multiply as she has a heavy burden of educating her children some of whom are still at home due to school fees.

"One of my children excelled and is supposed to study medicine, but is at home due to lack of money. Two more children are clearing primary and high school and I don’t know where to start to ensure they proceed with their education,” she said.

She also has 17 grandchildren depending on her.

Joyce Kalama, another widow thanked the foundation for giving her the two goats as her two children are jobless.

She said her area has not received rain for the last four years and it’s very dry.

"I will work hard and shall be coming to Mariakani to get leaves and grass to feed the goats until the rains fall again," she said.

This is the second time the foundation has visited Kilifi, previously they gave support to other widows in the Majajani area. 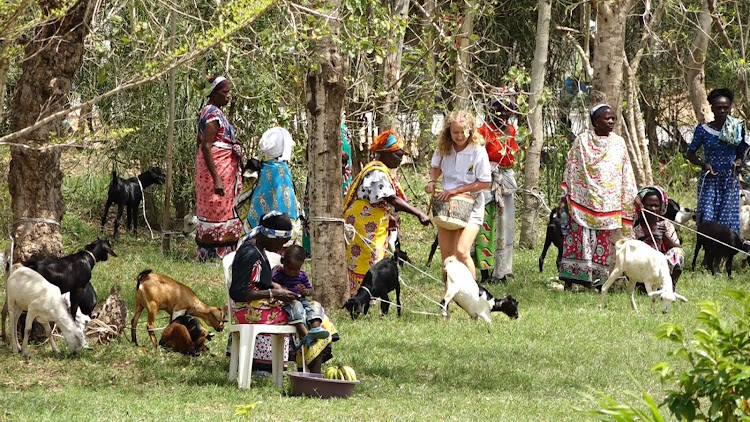 Some of the widows who were gifted the 200 goats for free by Give a Goat Foundation an NGO from the USA at Mariakani in Kilifi county
Image: ALPHONCE GARI

Amani Luwali, 36, was married to an Italian national and has a 15-year-old daughter.
News
4 weeks ago

Beacons had been set up in part of the 18 -acre parcel of land that covers the secondary school
News
1 month ago
Post a comment
WATCH: The latest videos from the Star
by ALPHONCE GARI Correspondent, Coast Region
Coast
13 November 2022 - 22:00
Read The E-Paper