• KRA has also developed an online system for allocating the seals, moving away from the manual process which is said to be prone to corruption.

• Tonui said it now takes an average of four to five days to move consignments from the Port of Mombasa to Kampala in Uganda. 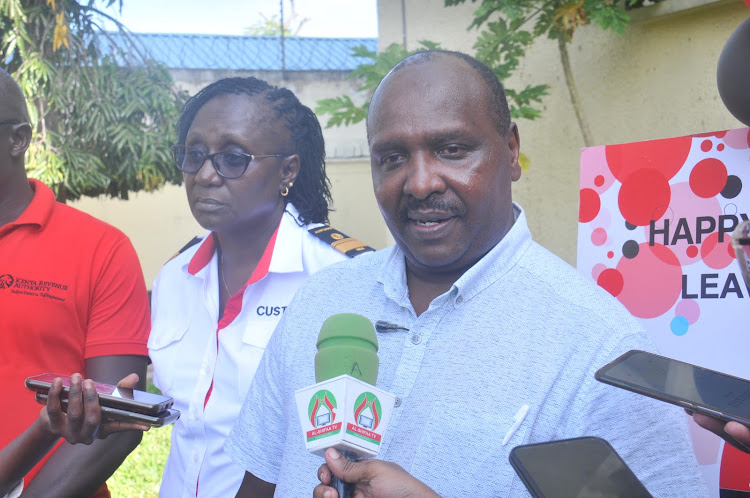 KRA Southern Region coordinator Joseph Tonui says they have increased the number of seals from 8,000 to 14,400.
Image: LABAN WALLOGA

The Kenya Revenue Authority has increased its electronic seals for cargo tracking in anticipation of increased activities at the Port of Mombasa.

This comes three weeks after President William Ruto ordered cargo  clearing and other attendant operation issues to revert to the Mombasa port.

On September 26, Kenya Ports Authority acting managing director John Mwangemi issued a notice to shipping lines to allow importers to decide on the cargo clearance and mode of transport for their goods.

Since the announcement by the President and the KPA, the trucking business is roaring in Mombasa and KRA has to increase the number of seals.

On Monday, KRA Southern Region coordinator Joseph Tonui said they have increased the number of seals from 8,000 to 14,400.

“We have been doing well in that area, though there have been some challenges in terms of the number of seals, which was then causing a bit of delays at the port,” he said.

Tonui was speaking during the launch of the taxpayers’ month and customer service week at the Mombasa KRA headquarters.

KRA has also developed an online system for allocating the seals, moving away from the manual process which is said to be prone to corruption.

Tonui said through the implementation of the Regional Electronic Cargo Tracking System and the Single Customs Territory, KRA has not only enhanced trade within Kenya’s borders, but also within the East African Community.

“Rects is not just a Kenyan system, it covers monitoring of cargo across the region. It is a digital system where we are able to view the trucks and their journey to their destination, and incase when they deviate from the normal route we are able to flag it out and take enforcement action,” he said.

Tonui said it used to take an average of 21 days to move consignments from the Port of Mombasa to Kampala in Uganda before the implementation of Rects system, but now it takes four to five days.

He said this has greatly reduced the cost of doing business for all players in the industry.

Tonui said the implementation of Rects and the scanner management system at the port has greatly enhanced service delivery by improving the efficacy and transparency of their services.

The scanner system, he said, is non-intrusive as it has reduced congestion since consignments were being scanned at the port and analysts were located in different locations and do not have to be physically in Mombasa.

“The system allocates randomly, the analyst can do it in Namanga or Busia, and there is no longer any collusion. Containers which match the declaration are allowed to leave and that is the efficiency that we were looking at,” he said.

Tonui said they are also rolling out a programme under the approved economic apparatus targeting bigger importers and clearing agents to be given preferential treatment.

“They will be given preferential treatment when they declare their goods, we will not put a lot of enforcement action on them,” he said.

The KRA southern region contributes about 30 per cent of the national taxes, mostly through the Port of Mombasa, and has been surpassing its targets in the last two financial years.

KRA to auction uncleared goods in Mombasa and Nairobi

The goods to be auctioned include high-end used vehicles, motorcycles, and household items.
Business
2 months ago

Why importers and traders loathed cargo clearance in Nairobi

Say they ended up paying up to Sh40,000 more for cargo haulage through SGR freight services
Counties
2 months ago

President Ruto issued a directive for the transfer of port services back to Mombasa after he was sworn in.
Counties
2 months ago

Shipping lines are advised to facilitate importers nomination of place of clearance.
News
2 months ago

She says what changed is the compulsory transportation of goods via the dry port.
News
2 months ago
Post a comment
WATCH: The latest videos from the Star
by ONYANGO OCHIENG’
Coast
04 October 2022 - 22:00
Read The E-Paper