Why importers and traders loathed cargo clearance in Nairobi

Say they ended up paying up to Sh40,000 more for cargo haulage through SGR freight services 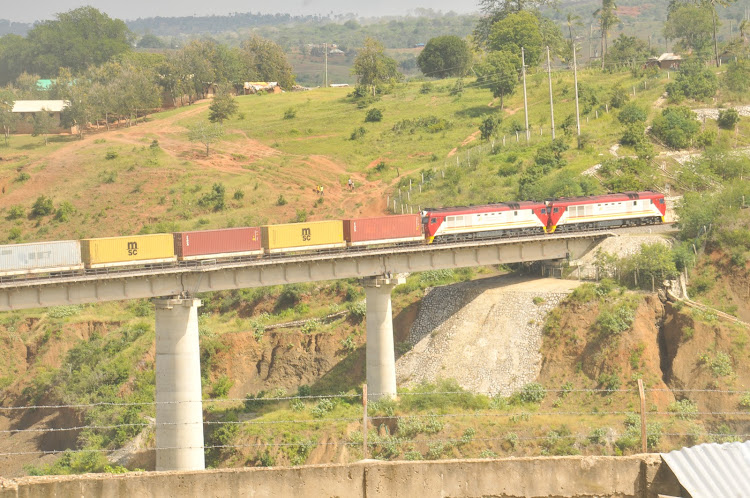 For four years, the government was entangled in a bitter tussle with importers and clearing agents over a directive that all imports through the port of Mombasa should be cleared either in Nairobi or Naivasha ICD.

As a result, Mombasa county’s economy shrunk by about 16.1 per cent, with more than 8,111 jobs lost, according to a study by the University Of Nairobi’s School of Business published on September 13, 2019.

Within a year of implementation of the directive, Mombasa had already lost Sh17.4 billion, equivalent to 8.4 per cent of its annual earnings.

The negative impact of the operationalisation of the SGR was witnessed with the closure of trucking businesses, relocation of clearing and forwarding business to Nairobi and some Container Freight Stations closed for loss of business.

At the same time truck drivers were rendered redundant, warehouses and roadside businesses along the Mombasa-Nairobi Highway were also affected negatively.

The Kenya Railways Company has been doing an average of eight freight trains daily, each carrying about 100 containers, from the port of Mombasa to Nairobi’s Inland Container Depot.

SGR trains were transporting a total of 800 containers daily to Nairobi, this, therefore, meant that truck businesses were adversely affected.

However, KRC insisted that they were doing only 40 per cent of all the total imports received in the country.

Apart from the negative impact on the economy of Mombasa, the SGR freight services turned out more expensive compared to trucks, according to traders.

SGR freight services were meant to be cheaper and a fast mode of transportation of cargo from Mombasa to Nairobi.

The truck transport companies charge at least Sh90, 000 for the same and it takes up to 15 hours or a whole day to transport cargo from Mombasa to Nairobi.

In an interview with the Star, Mwanthi said the importers were being forced to pay the shipping lines upfront charges and ended up spending more than Sh100, 000 to transport a 20-foot container to Nairobi.

“An importer would pay $800(Sh96,000) for cargo from Mombasa to Nairobi. From the ICD to their premises, they will also be required to pay an additional $300 (Sh36, 000) to a truck company for the last mile services,” Mwanthi said.

Mwanthi further explained that Container Freight Stations and transport companies offer credit facilities of up to 30 days to the clients, whereas KRC only transports cargo after being paid upfront.

A CFS also offers storage facilities to clients of up to 30 days, whereas at the ICD Nairobi, KPA only offers a four-day grace period to clear your goods.

“If you fail to clear your goods within four days, a 20-foot container attracts storage charges of about $40(Sh4, 800) per day,” he said.

He added that a shipping company also starts charging demurrages when the container is not returned to the ship within a specific number of days.

“Small importers, who do not have enough money to clear their cargo on time, ended up paying more on storage and demurrages. A trader would prefer a CFS that offers credit facility and an easy repayment mode,” he said.

According to Mwanthi, the big importers in the country will continue to use SGR services, but the small ones should be allowed to use their mode of choice.

Ruto issued instructions for clearing goods and other attendant operation issues to revert to the port of Mombasa.

On Monday, KPA acting managing director John Mwangemi issued a notice to shipping lines and agents on the reversion of port services back to Mombasa.

“This is therefore to notify all shipping lines that importers’ documentation of place of clearance and mode of transport for their goods shall be at their choice,” Mwangemi said.

Clearance can either be done at the port of Mombasa, Kenya Revenue Authority’s licensed CFSs and Kenya Ports Authority ICD.

“This notice superseded the notice issued on June 6, 2018,” Mwangemi said.

There have been fears that the government decision to rescind the earlier order would affect the repayment of the Chinese loan that was used to construct the SGR.

In May 2014, Kenya signed a Sh324 billion loan agreement with state-run bank Exim Bank of China to finance 90 per cent of the 485km Mombasa- Nairobi SGR line.

In December 2015, the Jubilee government under former President Uhuru Kenyatta received another Sh158 billion loan for the Nairobi-Naivasha SGR line.

However, Kifwa national chairman said Kenya cannot fail to pay back its loan because the government has been raising monies through the Railway Development Levy, which is charged on all imports to Kenya.

“The Railways Development Levy has been in place since 2012. It is still in charge of all imports into Kenya. That should be used to pay for the loan that was given to Kenya by the Chinese to construct the SGR,” he said.

He said KRC should now work with transporters to offer the last mile services that will see cargo at ICD Nairobi is loaded to waiting trucks and delivered to the importers’ premises.

“KRC should offer a package that will see cargo railed to Nairobi and immediately loaded onto a waiting truck. An importer will be more than willing to pay $700, but is assured that cargo is delivered at his doorstep,” he said.

He said with this kind of arrangement, KRC will continue offering rail services and truck companies offer last mile services.

“It will be a win-win situation for both KRC and truck companies," Langat said.

She says what changed is the compulsory transportation of goods via the dry port.
News
4 months ago

President Ruto issued a directive for the transfer of port services back to Mombasa after he was sworn in.
Counties
4 months ago

Shipping lines are advised to facilitate importers nomination of place of clearance.
News
4 months ago

Naivasha EZ to operate as port operations revert to Mombasa

President Ruto made an announcement that all port operations should be reverted back to Mombasa
Business
4 months ago
Post a comment
WATCH: The latest videos from the Star
by CHARLES MGHENYI Chief Correspondent, Coast Region
Coast
27 September 2022 - 22:00
Read The E-Paper