The teams are expected to audit and give back recommendations within two months. 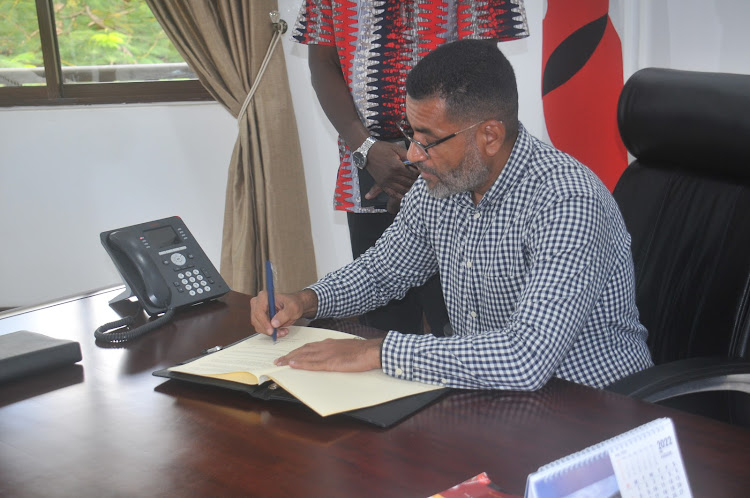 To resolve the perennial health workers’ strike and the crisis around the Sh4.9 billion pending bills, Mombasa Governor Abdulswamad Nassir has formed two teams to work on the problems.

Dr Chibanzi Mwachonda will chair the Healthcare Systems Taskforce and Mahmoud Noor will be in charge of the finances taskforce.

The two teams are expected to audit and give back recommendations within two months.

“We are also looking at how we can maximise the usage of all the medical facilities in the county for people to get better services.”

The task force will consist of a representative from the Kenya Medical Associations, Mombasa Civil Society Organisations, the National Health Insurance Fund and six Community Health Volunteers representing each subcounty.

Other members of the task force will include the chief officer from public medical services and public health and the county Secretary.

“My administration is looking at the economy of scale and also looking into ways on how the purchase of medicine and non-medicinal items can be centralised so that the county can have low purchasing rates,” Nassir said.

The task force would also be expected to review the architecture of healthcare delivery, including human resources for health and ICT for health in the county.

It would do an assessment on the state of physical healthcare infrastructure, including buildings and heavy and movable machinery equipment, evaluate the state of supply chains and recommend the upgrading and or special purpose of existing medical facilities.

The team is also expected to audit the current public healthcare human resource deployed and make recommendations to address skills gap, assess and recommend on addressing disease patterns and also formulate lasting solutions towards achieving universal health care that is affordable and accessible.

The team will table its report to the governor in 30 days’ time.

County Secretary, county Attorney and finance chief officer would be part of the team with its secretariat in the office of the governor.

The governor promised that in the next Finance Bill, Mombasa residents would see a reduction in the payment of licenses.

“We are also going to see the single business permit collapsed into one. You will no longer have to pay for health, fire and other licenses separately. You just pay once to process the licenses,” the county chief said.

Nassir said the county has an ambitious plan of enacting the Mombasa Revenue Services.

MRS, he said, will operate like KRA whereby it will look into all revenue streams and ensure that all loopholes are covered.

“We want to have a centralised point of looking into our revenue streams and source. The county economy is already in bad shape; we cannot afford to burden the citizens into paying extra, that’s why we are moving in to seal loopholes,” he said.

The task force is expected to table its report within the next 60 days.

According to a report by the Office of the Controller of Budget, Mombasa’s outstanding pending bills as of June 30, 2021 amounted to Sh4.46 billion.

The Office of the Auditor General listed the eligible pending bills as of June 30, 2020, at Sh1.61 billion out of which the county has settled bills amounting to Sh202.61 million, leaving a balance of Sh1.41 billion as of March 2022, according to Nassir.

We have slowly but surely become a nation of debt. Everywhere you look, debt seems to be the prevailing commodity.
Opinion
2 weeks ago

Mombasa is grappling with pending bills in excess of Sh4.29 billion.
Counties
4 weeks ago
Post a comment
WATCH: The latest videos from the Star
by ONYANGO OCHIENG
Coast
23 September 2022 - 22:00
Read The E-Paper