The former casual workers were sacked in 2009 during a restructuring. 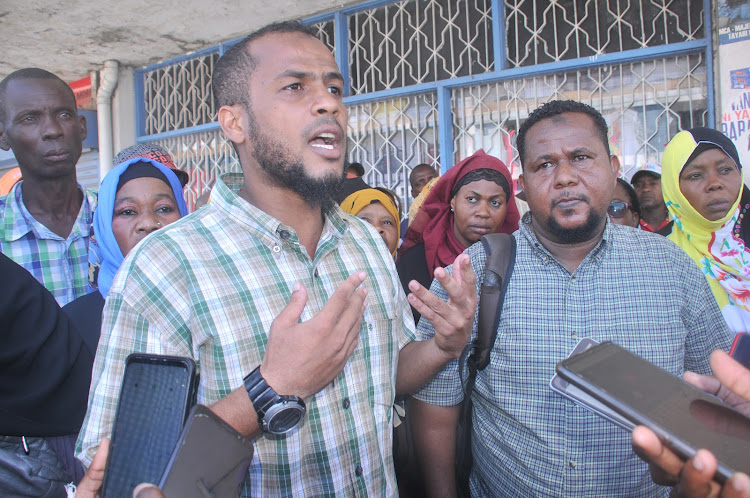 Hussein Khaled, One of the former employees of KPA who were sacked, addressing journalists outside Dock Workers Union Offices in Mombasa.
Image: LABAN WALLOGA

Hundreds of casual workers who were sacked from the Kenya Ports Authority in 2009 have asked President William Ruto’s government to reinstate them.

Speaking to the press on Wednesday, the former KPA employees said they were sacked without any compelling reason.

“We were not given any reason before we were sacked. We have been jobless since 2009, and we have been in and out of court in an effort to have our jobs back, but we have not succeeded,” said Hussein Khalid, the group's spokesperson said

Hussein said that it is sad that the 247 former employees continue to suffer after being locked out of their jobs, while KPA is still hiring fresh batches of workers and ignoring them.

KPA had promised that it would first rehire them before hiring new staff, they said.

He said recently KPA hired at least 200 people, but none of those who were sacked in 2009 was considered.

“We are particularly unhappy to notice that since we were laid off, KPA has still been absorbing new recruits from time to time and granting them permanent terms,” he said.

“The government had committed in writing that the 247 of us will be re-hired but that has not happened.”

Hussein further added that they are experienced dock workers and had worked at the port for nearly 10 years until KPA suddenly refused to renew their contacts.

“We are fit and committed to our work. We are experienced and still in good health to return back to work”.

He said last September they had a meeting with the National Assembly’s Labour and Employment Committee, the KPA management and Dock Workers Union, but they are yet to be re-employed.

“We want the reinstatement of KPA employees who were sacked some years back. There are three groups of 28, 247, and 199. I will give a separate detailed memorandum for the three groups for forwarding to President Ruto,” said Sang.

He also called for the reinstatement of the annual bonus which KPA management discontinued without any reason, whereas the Kenya Revenue Authority employees continue to earn the annual bonus every December.

“We want to be paid our three-year annual bonus that is being held by the National Treasury, while our counterparts at KRA have continued to get paid,” he said.

“The performance and productivity bonus was also reduced to the extent that it is no longer an incentive and inadequate to employees.”