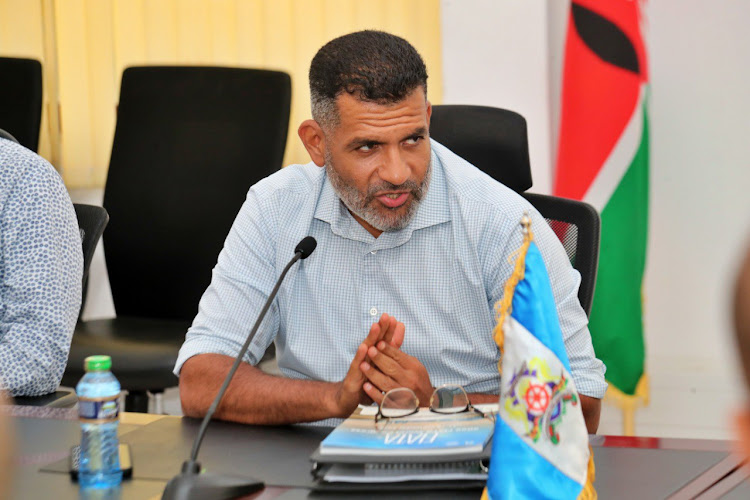 Mombasa Governor Abdulswamad Nassir during a meeting in his office on Monday.
Image: LABAN WALLOGA

The Mombasa county government has suspended new projects until the completion of all pending ones.

On Monday, Governor Abdulswamad Nassir held a consultative meeting with county executive members and chief officers at his office.

Nassir said the meeting was held to set his near-term priorities to ensure the county civil service aligns with his vision to deliver for the people of Mombasa.

“I have directed that there be a temporary suspension on the commencement of new projects until we have a substantive way forward on the completion of old projects and resolving the issue of pending bills,” he said.

Nassir also said they are also working on how to resolve the issue of pending bills.

The new administration is taking over the county with outstanding debts totalling 4.29 billion from the predecessor Hassan Joho.

Nassir and his deputy Francis Thoya were sworn into office last Thursday in an elaborate event held at the Mama Ngina Waterfront Park.

The event was graced by Azimio leaders including Narc Kenya party leader Martha Karua and his Wiper counterpart Kalonzo Musyoka. They were later joined by ODM boss Raila Odinga at a Mombasa hotel for a luncheon.

On Monday, Nassir said he has assigned his deputy Thoya the responsibility to supervise a Rapid Results Initiative aimed at clearing the streets of Mombasa of solid waste with immediate effect.

The garbage and sewage menace has bedevilled Mombasa for years.

“I have also tasked a sub-committee to prepare a plan to ensure all street lighting and market lighting is operational within the next seven days,” Nassir said.

During his speech after his swearing-in ceremony, the governor reiterated that under his leadership, the garbage menace in the streets shall be a thing of the past.

“My administration shall float an international expression of interest to invite a strategic partnership to assist the county comprehensively manage solid waste in a manner that is sustainable and not just affordable, but profitable for the county within my first 100 days in office,” he said.

On September 6, Nassir led a high-level delegation to the Mwakirunge dumpsite in Kisauni constituency on a fact-finding mission. The visit he said, was to understand the challenges at the dumpsite in order to be able to offer the best solution to it.

Nassir also promised to shut all illegal landfills including VOK, Kadongo and Kwa Sonko landfills as he urged Mombasa residents to be responsible and not litter everywhere.

Thoya, commonly referred to as ‘Magufuli’, committed to supporting his boss in the quest to make Mombasa clean again promising that they intend to do the work in the first 100 days.

“I understand there have been issues with piles of garbage in Manyimbo and Makaburini burial sites. I am also aware of the disquiet from some Christians saying there is discrimination that only the Christian burial sites are filled with garbage,” he said.

“That’s not true, but my assurance to the Christian fraternity is that the garbage will be removed. I will personally oversee that it is done.”

He said the county will construct perimeter walls around the two cemeteries to stop any further illegal dumping activity.

He also urged residents to be responsible for the environment.

In his speech during their inauguration, Thoya also put on notice lazy and corrupt county officials, warning them that their days were numbered.

“Time for politicking is over, Mombasa people want services. I want you to know that ‘Magufuli’ is back, I have received complaints especially about the inspectorate officers harassing people and soliciting bribes, I won’t condone that,” he said.

The Mwakirunge dumpsite is currently facing legal tussles from the Kenya Civil Aviation Authority and area residents, who are calling for its closure.

The High Court in Mombasa in May this year ordered the county government to stop depositing waste at the site.

Mombasa Lands and Environment Court judge Lucas Naikuni issued the orders on May 11 after petitioner Ainea Ragen moved to court.

Ragen, a public interest litigator, said thousands of Mwakirunge residents have always been complaining of toxic emissions coming from the dump site.

In his petition, he said Mwakirunge is also a flight path, meaning the scavenging birds at the dumpsite are a risk to low-flying planes landing at the Moi International Airport in Mombasa.

The Ethics and Anti-Corruption Commission and Directorate of Criminal Investigations are listed as interested parties.

In the months of July and August most hotels in the coastal region were surviving on a small number of foreign tourists.
Business
2 weeks ago

Nassir takes over from Hassan Ali Joho who led the county for ten years.
News
3 weeks ago
Post a comment
WATCH: The latest videos from the Star
by ONYANGO OCHIENG
Coast
20 September 2022 - 22:00
Read The E-Paper